Also called earnings before interest and taxes (EBIT), operating profit is defined as the profits earned from a company’s core business – after subtracting the cost of goods sold (COGS), operating costs, and any depreciation expenses.

The remaining balance after deducting these costs/expenses from the company’s operating revenue can be used for expansion, investment, and growth.

What Is the Significance of Operating Profit?

The formula for operating profit is fairly straightforward:

How to Calculate Operating Profit

The formula components are defined as follows:

Operating revenue reflects the company’s core business. Any income that isn't related to the company’s primary business is omitted from the computation.

The cost of goods sold is the complete cost of whatever a company is selling. For a retail company, COGS is the wholesale cost of the products the company purchases to resell.

Operating expenses include any costs associated with running a business. Companies typically include salaries and wages in this figure but may also add other business-related expenses.

Some businesses make substantial investments in fixed assets that will be used over several years. Instead of including the entire amount on the income statement, they divide up the cost over the asset’s estimated lifetime using depreciation and amortization.

Imagine two businesses in the same industry. Both companies seek private investment and provide their income statements to potential investors for evaluation.

Pierre’s Bakery and Gino’s Italian Bakery offer retail sales of bread, pastries, and other treats. Their income statements look like this: 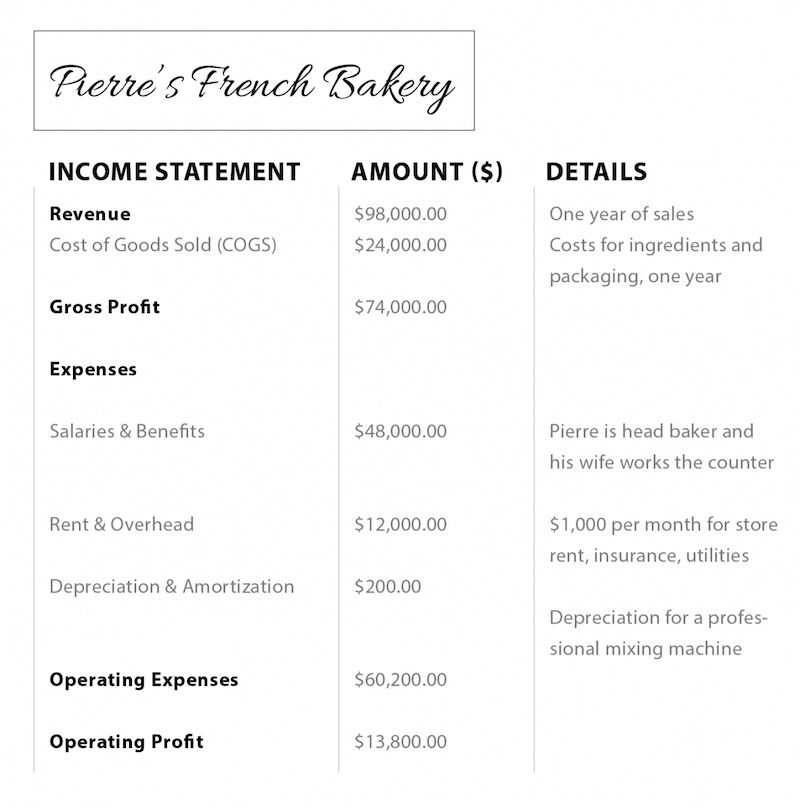 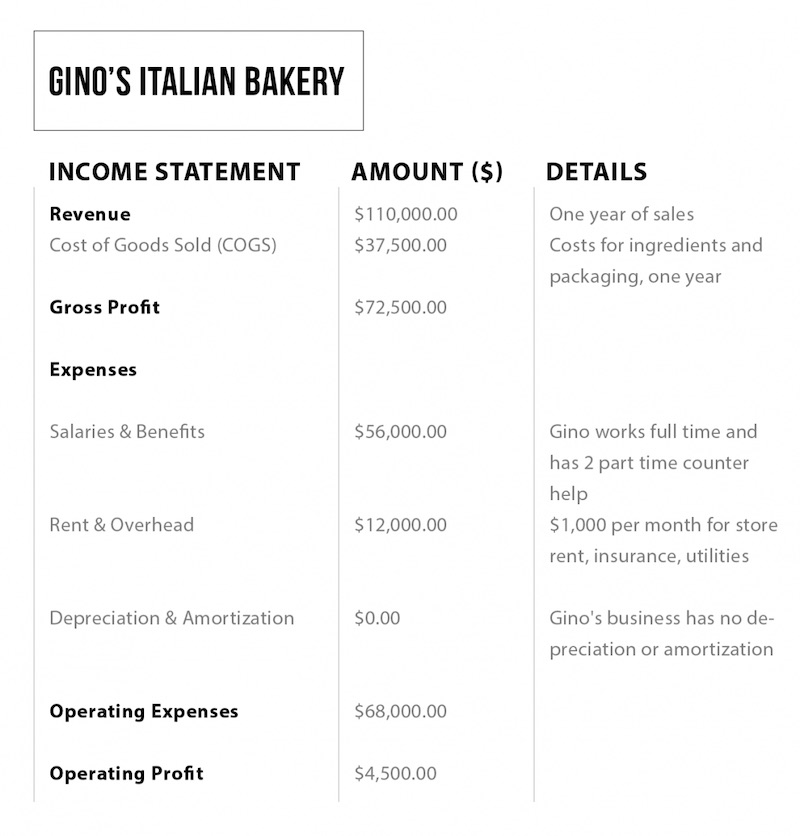 Gino had a higher gross profit, however, when you take all other costs into account, Pierre’s bakery had a better operating profit. This is a more revealing measure of profit because it includes all the operating expenses (not just the costs of the goods themselves).

If an investor were to choose between Pierre’s French Bakery or Gino’s Italian Bakery, Pierre’s offers better potential due to its greater operating profit.

The largest advantage of using operating profit as a comparison metric between companies is that it omits certain expenses (such as taxes and interest) from the final figure. If you compare companies in varying tax jurisdictions or debt levels, it’s much easier to assess the profitability of operations.

Operating profit also focuses on the company’s core business and omits any extraneous business revenue from its formula. For example, if a retail company sells a parcel of real estate, the proceeds are not included in operating profit because it would give a distorted view of the profitability related to the company’s business operations.

Operating profit, however, omits expenses that tell the entire story about a company’s financial health (e.g. interest and tax expenses). This is important since these expenses can significantly reduce a firm’s profits.

Consider two businesses in the same industry: Pierre and Gino have equal operating profits, but Pierre’s Bakery is in New York and Gino’s Bakery is in Virginia (where taxes are lower). Gino’s bakery is actually in a better financial position. Merely looking at operating profit misses crucial factors when considering a company’s potential health.

Small businesses can react dramatically to both opportunities and challenges. A spike in the cost of ricotta cheese for cannolis can make Gino’s operating profit drop as his cost of goods increases. A celebrity might stroll into Pierre’s bakery, take one bite of his famous chocolate eclair, post a picture on Instagram, and Pierre could see sales spike due to the increased exposure. Each of these situations is temporary but can have a dramatic effect on annual operating profit.

Time smooths out the typical jumps and dips in a small business’ income and expenses. Gino may need time to find a new supplier and ultimately reduce his COGS below his original figure. Pierre may invest heavily in eclair production, only to find that interest in eclairs was temporary, driven solely by the celebrity endorsement.

No single metric can provide a complete answer to an investor’s questions, nor should one year’s numbers be used to make any final investment decision. A thoughtful, comprehensive approach that takes the numbers into account – and the story behind them – is one of the best ways to evaluate the prospects of a company.

Ask an Expert about Operating Profit

How to Calculate Common Size Financial Statements
Financial Statement Analysis for Beginners
Why Is A Company's Free Cash Flow So Important?
Is Your Bank's Balance Sheet Overloaded With Distressed Real Estate?
The Top 4 Places CFOs Hide Fudged Numbers
Ask an Expert
All of our content is verified for accuracy by Mark Herman, CFP and our team of certified financial experts. We pride ourselves on quality, research, and transparency, and we value your feedback. Below you'll find answers to some of the most common reader questions about Operating Profit.

Are Operating Profit and EBITDA the Same?

Operating profit is also the same as EBIT (Earnings Before Interest and Taxes). Note this is different than EBITDA which is NOT adjusted down for Depreciation and Amortization. EBITDA attempts to measure cash flow – depreciation and amortization are not actual cash outlays.

Operating profit, on the other hand, measures income (which will appear lower than EBITDA).

Where Is Operating Profit on the Income Statement

Operating profit can typically be found after operating expenses on the income statement.

Can Operating Profit Be Negative?

Yes, your operating profit can be negative. If this happens, it means the company is not selling enough to cover its costs.

If you have a question about Operating Profit, then please ask Mark.

Ask an Expert about Operating Profit