Warren Buffett is perhaps the most famous investor in the world, amassing a fortune of over $80 billion during his lifetime. His fortune wasn’t made overnight, however.

How did Warren Buffett get rich? Here are 5 of his best money moves that helped him become one of the world’s wealthiest people.

1. Starting a Business as a Child

Warren Buffett started his entrepreneurial journey at age 6 by selling individual sticks of gum at school. He also sold Coca-Cola door to door during the summer (a business he now has a $22 billion stake in).

When he was 13, Buffett started a pinball machine business, collecting income from machines placed in barbershops across Washington, D.C. He and a friend would buy machines for $25, fix them up and split the profits with the barbershop owners. They would then reinvest the profits to buy additional machines, eventually earning over $1,000 a year. By the time he was 15 years old, he had saved over $5,000. In 1946, this was serious money (about $66,000 in 2020).

The lesson here is to find creative ways to earn money – not just rely on your day job. By seeing an opportunity and creating a business from it, Buffett was able to grow his net worth and put himself in a position to become an investor at a young age.

2. Losing Money on His First Investment

Buffett also became an investor at a young age. At just 11 years old, he bought his first three shares of stock in Cities Service with all the money he had saved (about $114). In an annual letter to investors, he recalled the event saying, “I had become a capitalist and it felt good.”

Buffett did eventually sell those three shares at a small profit ($2 per share gain), but then watched the price soar over the next few years – and learned a difficult lesson in market timing.

“Don’t watch the market closely,” Buffett said in a CNBC interview, advice he has repeated over the years. In fact, recalling his first stock purchase, Buffett said that he would have rather invested in an S&P 500 Index Fund (which wasn’t available back then) and let the money grow.

Buffett’s advice is clear: Don’t try to time the market and don’t pick your own stocks. Instead, consistently invest in broad-based index funds on a regular schedule and let compounding interest do the work of building your wealth.

Buffett has been known to be risk-averse and his investing partnerships helped him leverage other people’s money (instead of his own) to grow his wealth significantly.

At 25, Buffett started a limited partnership called Buffett Associates, Ltd. It was composed of 7 members of his close family and friends. They all invested their own money, totaling up just over $100,000 in investments. Buffett only put in $100 himself, but managed the partnership investments and took no management fees until there was at least a 6% return.

After running his multiple partnership funds for 13 years, he was able to grow his personal investments to over $25 million –  all while growing the investments in his partnerships to over $100 million in Assets Under Management (AUM).

Not everyone will have access to a hedge fund partnership, but the lesson here is to learn what makes a company a good value. Buffett made his millions by evaluating and finding companies that he believed held strong intrinsic value compared to their share price.

Putting together a diversified portfolio of value stocks can help you take advantage of the growth offered by investing in undervalued companies.If you don’t have the funds to grow a business to the next level, consider taking a page from the Buffett playbook and form an investing partnership to build your wealth.

Buffett is famous for finding (or creating) incredible deals before investing in companies. He is strategic in spelling out every detail, likes to get straight to the dollars and cents, and has a strong habit of avoiding deals that appear risky. “We’ve done better by avoiding dragons rather than by slaying them.” said Buffett in his 1991 Berkshire Hathaway annual meeting.

If you want to build wealth like Warren Buffett, don’t simply invest in every “hot deal” that comes your way. Instead, evaluate opportunities based on a few factors:

Is the Company’s Business Model Straightforward?

Does the Company Have Free Cash Flow After Paying Bills?

Buffett prefers companies that have money to invest in their growth, rather than capital heavy companies with thin margins.

Will the Company Be Profitable Over the Next 10 Years?

Buffett once said “Our favorite holding period is forever.” He always has a long-term mindset when investing in a company and likes to be able to visualize what the Return on Equity (ROE) will be over the next 10 years.

In 1964, share prices of American Express dropped by more than 40% due to the infamous salad oil scandal. Buffett saw an opportunity to concentrate 40% of his partnership holdings into the credit card company. Within 3 years, this investment had returned Buffett's partnership over $100 Million.

Buffett understood their business model and knew they had the right business fundamentals to grow over the long-term. In fact, his holding company, Berkshire Hathaway, still owns over 150 million shares of American Express and it makes up over 6% of their portfolio as of 2020.

Over an investor’s lifetime, losing money is part of the risk, but the sentiment behind this quote is that you should never gamble on an investment. Rather, you should take your time to research an opportunity and only invest in something that has true value.

Buffett has been able to use this philosophy to return over 20% annually on Berkshire Hathaway stock since 1965. He avoids risk and finds more wins than losses in his investment portfolio. Currently, Warren Buffett seems to think the best value for your money is passive investing in index funds.

Why Does Buffett Support Passive Investing?

In recent interviews, Buffett has been outspoken about his position on passive investing. He is adamant that the low fees – coupled with a history of profitable performance – makes index funds a fantastic value. Buffett is also convinced that this investment method has a much higher chance of out-performing actively-managed funds over time:

“One side has high fees and they think they can pick out stocks and the other side has low fees,” Buffett said in his 2020 shareholders meeting. “I know which side is going to win over time.”

What to Learn From Warren Buffett’s Investing Strategies

Warren Buffett is a prolific investor, becoming a millionaire by 30 and a billionaire by 56. His investment strategies have catapulted him among some of the world’s wealthiest individuals.

Here’s what we can learn from Warren Buffett’s investing strategies.

The “Sleep Well at Night” Portfolio Is Simple

Over time, Buffett has concentrated a large portion of his investments into companies he thinks have the best value and business models.

As you can see, these are all household names with strong reputations and market value. They’re the kind of companies you can invest in and feel relaxed about, knowing they’re great long-term investments.

If you’re going to follow in Buffett’s footsteps, be aware of your investing risk tolerance. Buffett is famously risk-averse, focusing on only investing in companies that he’s sure won’t lose him money. As the investor himself says, “Risk comes from not knowing what you’re doing.”

So before you decide to purchase any investment, you need to evaluate your own risk tolerance.

Knowing your personal risk tolerance is an important key to becoming a successful long-term investor.

What's So Great about Warren Buffett, Anyway?
Stock Market Investing 101: How Anyone Can Start Investing Today
5 Billionaire Investors You've Never Heard of Before
How to Play the Buyout Game: 3 Tips For Finding the Best Deals
10 Green-Collar Jobs with $80,000+ Salaries
Ask an Expert
All of our content is verified for accuracy by Mark Herman, CFP and our team of certified financial experts. We pride ourselves on quality, research, and transparency, and we value your feedback. Below you'll find answers to some of the most common reader questions about How Did Warren Buffett Get Rich? 4 Key Stocks to Follow.

What Is a Good Net Worth by Age?

Tracking your net worth is one of the best ways to see how well your overall finances are progressing. But how much should you have by now?

According to the Survey of Consumer Finances, here is the median net worth by age group in the U.S.: 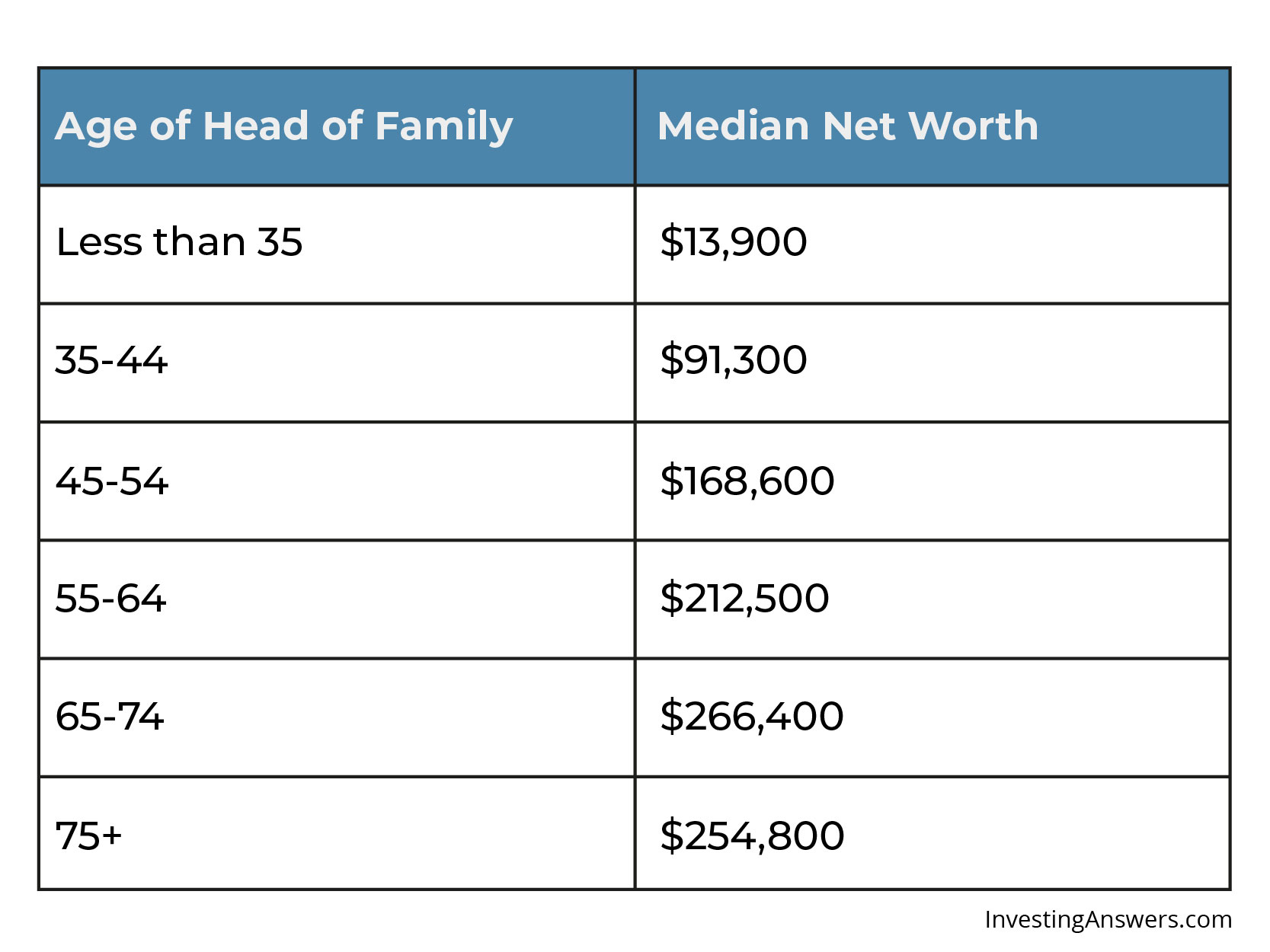 Note these numbers are merely the median to compare to peers, and do not necessarily represent a successful retirement plan as the average American does not save enough.

A more important benchmark is retirement at your desired age. You can check out some of our favorite tips on finding your “retirement number” and make sure you’re on track!

Growing your wealth into billions of dollars is extremely difficult. Warren Buffett grew his wealth during a period of time where finding hidden deals and extremely under-valued companies was more difficult (pre-internet).

It’s tough to say whether any one person can get rich the same way Warren Buffett did, but his success leaves clues for you to follow in your own wealth-building journey.

Are There Other Investors I Should Analyze?

Warren Buffett is an incredible resource of wisdom in the world of investing, but there are others you can follow and analyze to build your own investment strategy.

The founder of Vanguard Group (one of the world’s largest investment companies), Bogle pioneered index funds – and Buffett himself points current investors to Bogle’s investment strategies.

Graham was Warren Buffett’s mentor and his book, The Intelligent Investor, is still recommended today by many top investors. He is known as the father of value investing and taught Buffet everything he knew about finding undervalued companies to invest in.

The founder of Microsoft – and Buffett’s favorite bridge partner – knows a thing or two about investing in technology. Consider studying how Bill Gates got rich and applying those lessons to your own investing strategy

Sykes is a day-trading penny stock investor who grew his investments to over $1 million by 21 years old. Though this type of investing is extremely risky, you can always learn from different perspectives.

What is Warren Buffett’s Most Important Investing Lesson?

Of all the investing lessons Buffett has taught over the years, perhaps the most important lesson is this: Keep it simple and don’t invest in something you don’t understand.

If you have a question about How Did Warren Buffett Get Rich? 4 Key Stocks to Follow, then please ask Mark.

With each passing generation, we find new and better ways of doing things. Read More ›

Ask an Expert about How Did Warren Buffett Get Rich? 4 Key Stocks to Follow