Moving averages define the trend and provide support or resistance. They also give trading signals when they move through each other. These signals are called "moving average crossovers."

A crossover signal is generated when a shorter moving average crosses over a long term one and visa versa.

When the shorter-term moving averages crosses below the longer-term, a sell signal is given.

To make accurate trading decisions, these moving average crossovers are most effective when combined with other technical analysis tools such as candlesticks or indicators such as MACD.

The three-year weekly chart of AT&T provides a good example of both the bearish death cross and bullish golden cross. 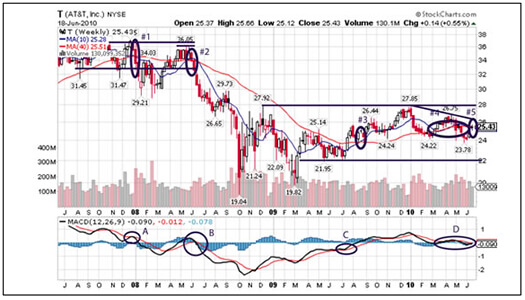 note the movement of MACD (labeled A). Prior to the death cross, the indicator was on the verge of giving a buy signal. But in conjunction with the death cross, MACD, dipped back down, reaffirming the sell signal. The MACD histogram also began building in negative territory.

However, encountering historical resistance around $36, the stock faltered. Once again, a death cross occurred (labeled #2) as the 10-week moving average went below the 40-week. Within five months, the stock dropped to a low near $19. Traders who shorted the stock upon the appearance of the death cross would have made hefty +47% returns. The sell signal given by MACD (labeled B) provided additional evidence of the stock's bearish movement.

In late July 2009, T managed to climb above the 10- and 40-week moving averages. MACD signaled a buying opportunity at this time (labeled C). A bullish golden cross appeared shortly after (labeled 3). Following the golden cross, AT&T rose to a height of $27.85, where it encountered significant resistance. However, traders who had bought at the occurrence of the golden cross and held until the January 2010 high could have made +16% profits.

Since March 2010, the 10- and 40- week moving averages have essentially converged, as the stock has wavered above and below these support and resistance points (labeled 4). MACD has been equally noncommittal, crossing between a weak buy and sell signal (labeled D).

However, a bearish death cross (labeled 5) has again occurred. If confirmed by MACD and other technical indicators, traders can again profit from shorting the stock.

By using death and golden crosses to help make trading decisions, you can cross some uncertainty off your list of trading worries.

If you have a question about Principles of Technical Analysis: The Death Cross & The Golden Cross, then please ask Paul.

If you have a question about Principles of Technical Analysis: The Death Cross & The Golden Cross, then please ask Paul.

The basic idea of forex trading is the same as any other investment -- you want to buy low and sell high. Read More ›

Options are a powerful tool that all investors need to become familiar with. Read More ›

How to Insure Your Portfolio With Options

If you want to protect the stock you buy on an exchange in New York, you need to go to Chicago. Read More ›

4 Keys To Spotting Triple-Digit Gainers... Before They Take Off

Mark Twain understood the mind of an investor. Read More ›

Ask an Expert about Principles of Technical Analysis: The Death Cross & The Golden Cross