What Is a Command Economy?

A command economy (also known as a “planned economy”) occurs when decisions about the production and allocation of all goods and services are made by one central government authority.

Command economies are characterized by centralized control, forecasting, and pricing. A central authority develops economic forecasts (often multi-year forecasts) and orders goods to be produced accordingly. Goods are then distributed according to the government’s assessment of need. There is no private ownership of business.

All major industries in a command economy are government-run monopolies. This includes utility companies, banks, and factories producing everything from clothing to cars. Workers are government employees and – regardless of whether they wish to work at their job – everyone is assigned and expected to work.

Businesses operating in a command economy must follow all of the government’s directives and plans. They cannot respond to marketplace demand but must instead produce and sell according to government dictates.

Is a Command Economy Capitalist or Communist?

A command economy is a major feature of communist systems and the opposite of a capitalist society (where production and price levels are determined by market forces like supply and demand). In a command economy, the central government planning office determines production, distribution, and pricing.

Capitalism encourages entrepreneurs to start their own businesses to fill unmet marketplace needs. The so-called “invisible hand” (or the self-regulating features of the market) drive supply and demand rather than government dictates.

Consider companies like Apple and Amazon, both founded in the United States (a capitalist country). These companies grew from their founders’ abilities to spot unmet marketplace demand and fulfill that demand with better prices and higher-quality goods than the competition. As a result, they reap the rewards of their creativity, talent, and hard work, resulting in wealth.

In a command society, since there is no private ownership of businesses, entrepreneurs like Steve Jobs (Apple) and Jeff Bezos (Amazon) wouldn’t have been allowed to start their own companies. The government would have determined whether people needed computers or books, what kind would be produced, the quantity, and their selling prices.

Socialism is one form of a command economy. Communism is another.

In both, the government conducts economic forecasting and planning. The government also controls production, distribution, and pricing.

A command economy is very different from a market economy. Unlike a command economy, market economies rely upon the law of supply and demand to determine which goods are produced and in what quantity. Private business ownership and entrepreneurship is encouraged with prices changing due to marketplace demand and the supply of goods.

Which Countries Are Command Economies?

Cuba and North Korea are considered command economies. The former Soviet Union was a command economy, but shifted over the last several decades to a mixed economy. China moved from a command economy to a socialist market economy, blending both features of a planned economic system and a capitalist system.

How Does a Command Economy Affect Its Citizens?

Command economies demand that all citizens work, so unemployment is virtually nonexistent. The jobs that people have may not be stimulating or fulfilling, but citizens do not have a choice – they must work.

Central government planning agencies can make mistakes. When they do, surpluses and shortages occur. Citizens may end up creating a black market (illegal marketplaces) to purchase what they desire if the government stores do not carry the items.

Because all businesses are run by the government, citizens have little choice about the quality of the goods they purchase. Unlike market economies, they cannot “vote with their purse” and take their business elsewhere if the products are defective or inferior.

What Is the Goal of a Command Economy?

A command economy employs centralized planning, with government ownership of all means of production. Government control of distribution and pricing exists with the objective of eradicating unemployment, poverty, and social inequality.

What Is Prohibited in a Command Economy?

Under a command economy, the private ownership of business and the means of production is prohibited.

Pros and Cons of a Command Economy

There are several pros and cons of a command economy. 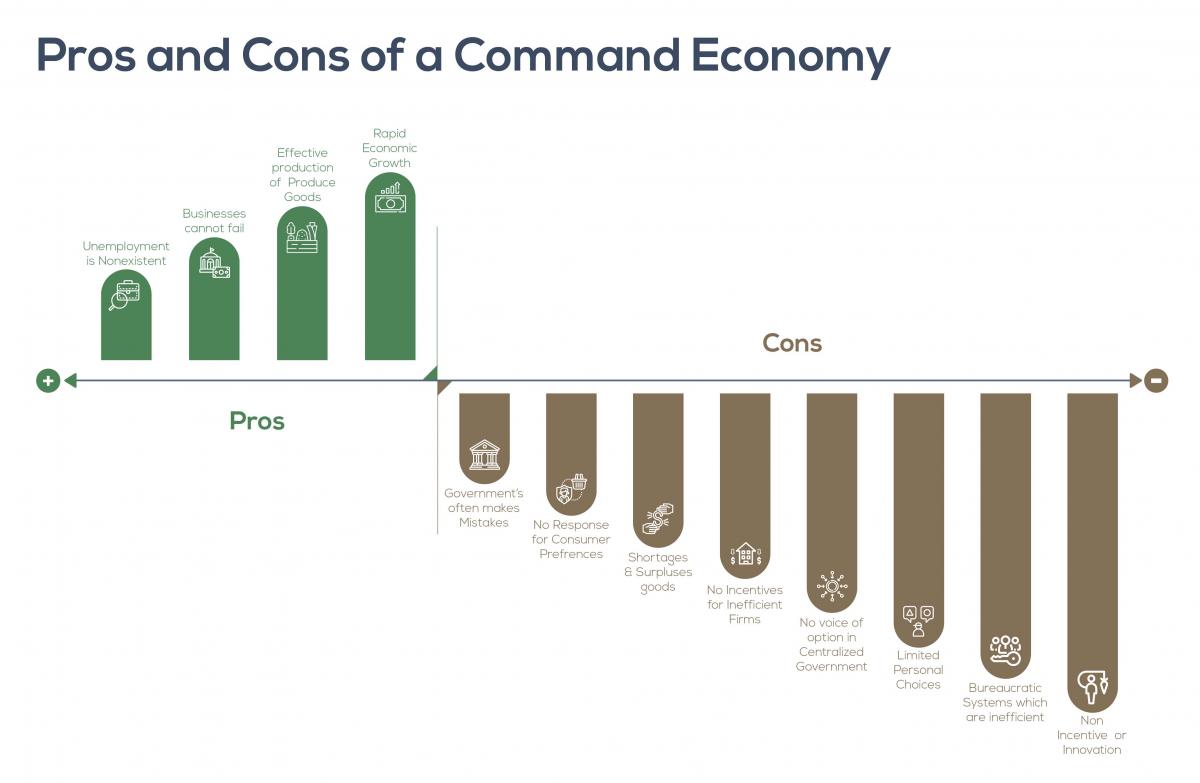 Ask an Expert about Command Economy

Leading Economic Indicators Cheat Sheet
15 Insider Facts To Demystify The Federal Reserve
Understanding Economic Indicators
10 Facts About China You Won't Believe (But You Should)
Quantitative Easing: 9 Reasons It's Bad for the U.S. Economy
Ask an Expert
All of our content is verified for accuracy by Rachel Siegel, CFA and our team of certified financial experts. We pride ourselves on quality, research, and transparency, and we value your feedback. Below you'll find answers to some of the most common reader questions about Command Economy.

Is China a Command Economy?

China’s economy was considered a command economy until 1978, when the country introduced numerous economic reforms. Over the next several decades, China transitioned various industries (starting with its agriculture) to a market economy. These reforms enabled China to improve its people’s standard of living while reducing poverty levels.. However, many large companies – including banks and energy companies – continue under government ownership.

Is a Command Economy Good or Bad?

A market economy appears to provide greater overall benefits and fewer drawbacks than a command economy and generally helps the entire nation’s income level and standard of living improve.

Although command economies may work for a time (such as the 1920-1930s era of economic growth in the Soviet Union), they rarely succeed for long. Throughout history, command economies eventually transition to more open, market-based systems.

Example of Shifting Away from Command Economy

For example, China lagged behind other nations in literacy and poverty levels. To close these gaps, the Chinese government chose a planned, conscious transition to a more open and free market. Starting in 1978, the country began shifting industries to a market economy while maintaining some central control. The result, according to the World Bank, is an upper-middle income country that still faces challenges but has made enormous progress since it began its transition in the late 1970s.

If you have a question about Command Economy, then please ask Rachel.

Ask an Expert about Command Economy