What is Yield Spread?

Yield spread is the difference in yield between two securities or, more commonly, two classes of securities.

How Does Yield Spread Work?

Let's assume that Bond X is yielding 5% and Bond Y is yielding 7%. The yield spread is 2%.

Spreads are generally described in "basis points," which is abbreviated "bps" and pronounced "beeps." One percentage point is equal to 100 bps. In the example above, a bond trader would say that the yield spread between the two bonds is "200 beeps."

Yield spreads help investors identify opportunities. The goal is to take advantage of expected changes in yield spreads between or among certain sectors of the bond market. To illustrate, consider the following table, which compares bond yields of various sectors to U.S. Treasuries: 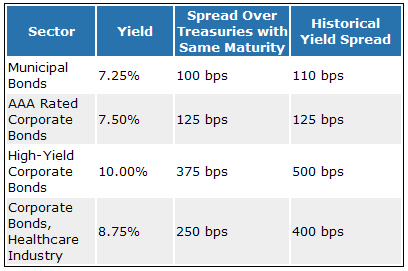 Why Does Yield Spread Matter?

Ultimately, when an investor using this strategy believes the yield spread between two sectors is out of line, he or she either buys or sells securities in those sectors (depending on whether the spread is too narrow or too wide) as a way to earn an extra return when the sectors eventually realign.

Ask an Expert about Yield Spread

Discounted Bonds: 3 Reasons Why They're Not As Great As They Sound
When Is The Best Time To Buy Bonds?
The 3 Most Deadly Misconceptions About Bonds
Why Buying A Bond Is Like Marrying Tiger Woods
Forget Treasuries -- Try These 3 Little-Known Bonds Instead
Ask an Expert
All of our content is verified for accuracy by Paul Tracy and our team of certified financial experts. We pride ourselves on quality, research, and transparency, and we value your feedback. Below you'll find answers to some of the most common reader questions about Yield Spread.

If you have a question about Yield Spread, then please ask Paul.

If you have a question about Yield Spread, then please ask Paul.

Ask an Expert about Yield Spread