The Federal Insurance Contributions Act (FICA) is a US payroll tax used to fund the Social Security and Medicare programs. These programs are designed to support those without wage income: retirees, dependents of non-working adults, and those with disabilities.

Who Does FICA Apply to?

FICA taxes are mandatory for most employers and employees. This applies to hourly (wage) workers, salaried workers, and the self-employed.

Is Anyone Exempt from FICA?

The only exemptions are for religious groups that were in existence prior to 1950. Such groups must file Form 4029, but the exemption is unavailable if the members also qualify for Social Security.

Additionally, foreign students or educators who hold other citizenship – but who are teaching in the United States – are exempt from paying FICA taxes.

Generally, non-US citizens who do not receive Social Security or Medicare benefits are exempt from paying FICA taxes. Review this comprehensive list of FICA exemptions before claiming exemption.

FICA for Employees and Employers

Your employer withholds 6.2% (up to $137,700) from your wages for Social Security tax and 1.45% for Medicare taxes. If earned income is more than $200,000 for a single filer ($250,000 for joint filers), employees must pay an additional 0.9% in Medicare tax. The amount that is withheld is automatically taken from your paycheck and paid directly to the Social Security Administration.

Employers match the amount paid in FICA taxes, so a total of 15.3% of your wages is contributed as a result of your employment. The employer’s contribution is also paid directly to the Social Security Administration.

FICA for the Self-Employed

Self-employed workers pay taxes towards Social Security and Medicare, too. However, these are referred to as “self-employment taxes” or the Self Employed Contributions Act (SECA). Self-employed people must pay an employee portion of 6.2% Social Security tax (up to $137,700 of net earnings).

How Do FICA Taxes Work?

FICA taxes are automatically withheld from the gross amount of an employee’s paycheck. These taxes are then matched by the employer and deposited to the Social Security administration (where they go toward current programs).

FICA does not work like a bank account. You aren’t “depositing” your social security payments to withdraw them at a future date. Rather, the payments made today into Social Security and Medicare go into one of two trust funds:

Both funds are financial accounts with the US Treasury and are invested in US Treasury bonds. Benefits are paid out of the funds, and any surpluses that the funds make are reinvested.

How Are FICA Benefits Calculated?

You can visit the Social Security administration and set up online access to track your estimated benefits.

FICA taxes fund both the US Social Security Program and the Medicare Program. As previously described, Social Security taxes are kept in a trust fund in the US Treasury department.

At 62, qualifying citizens can receive Social Security payments. However, taking payments at age 62 means taking less money than if they waited until their full retirement age (which currently varies by age group but is at least 65). Payments can be delayed until age 72, after which additional credits and potentially higher Social Security retirement benefits will accrue.

Medicare is a government-sponsored healthcare program available to American citizens and permanent legal residents aged 65 and older. Permanent residents must have lived in the United States for five consecutive years or more in order to qualify for Medicare.

Medicare is divided into Parts A, B, C, and D:

Even though Medicare recipients receive healthcare coverage through the plan, there may be some out-of-pocket expenses, especially for those electing Parts C and D coverage.

FICA taxes are part of what’s called “withholding.” Withholding includes the money that’s taken out of your paycheck to pay FICA taxes, plus federal and state income tax, and sent directly to the taxing governments. Some cities like New York also levy a local tax on residents.

Can I Deduct FICA on my Taxes?

No, the IRS does not allow you to deduct FICA from your income taxes.

Where Is FICA on my Paystub?

FICA may be listed on your paystub under “taxes” or “withholding.” The typical paystub breaks down each tax paid (e.g. federal, state, local, Social Security, Medicare) under the withholding amount.

On federal tax forms, self-employed people need to complete Schedule SE to determine their self-employment taxes. They can then deduct the employer portion from their gross income.

All of our content is verified for accuracy by Rachel Siegel, CFA and our team of certified financial experts. We pride ourselves on quality, research, and transparency, and we value your feedback. Below you'll find answers to some of the most common reader questions about Federal Insurance Contributions Act (FICA).

FICA vs. Social Security: Are They the Same?

How Do I Figure Out My FICA Score?

The acronyms FICA and FICO are often confused.

FICA is the tax contributed to Social Security and Medicare.

Three-digit FICO scores, however, are calculated using information in your credit history. They provide lenders with insight into how likely you are to repay a loan.

Is FICA the Same for Self-Employed and Employers?

However, the self-employed can deduct the employer’s portion of FICA, which is 7.65% (6.2% Social Security + 1.45% Medicare), from their income taxes. 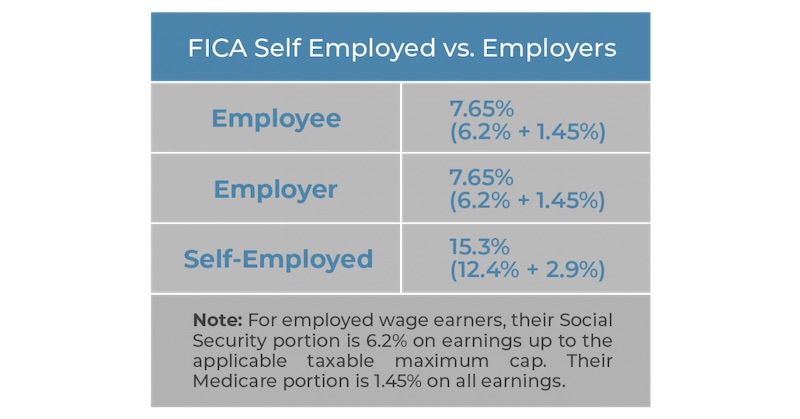 Rachel Siegel, CFA is one of the nation's leading experts at ensuring the accuracy of financial and economic text. Her prestigious background includes over 10 years creating professional financial certification exams and another 20 years of college-level teaching.

Ask a questionRead more from Rachel