What is a Dragonfly Doji?

A dragonfly doji is the most uncommon candle of the four different types of doji candlesticks. As with any doji, the dragonfly depicts a situation in which supply and demand are in equilibrium, thus possibly signaling an important reversal. It is characterized by having a small real body (or none at all) and a long lower shadow.

How Does a Dragonfly Doji Work?

During the period of a dragonfly doji, prices will typically open at a high, sell off, and then return to the opening price. Dragonfly doji are fairly unusual, but when they do occur, they often resolve bullishly.

A dragonfly forms because when there is early pressure forcing the security down, but then it finds support, and buying pressure pushes the security back up.

As significant as the dragonfly doji is, one should not take action on its message alone. Always wait for confirmation from the next candlestick before taking trading action. 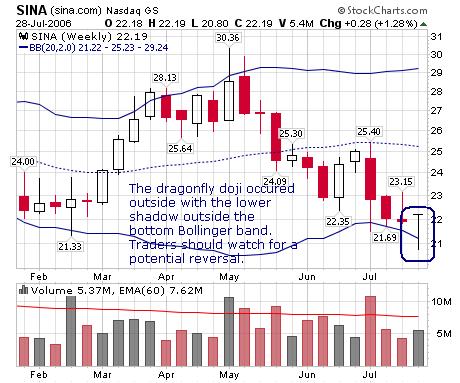 Why Does a Dragonfly Doji Matter?

Dojis, especially dragonfly dojis, can mark a point of a reversal in a trend. By recognizing these points, traders have one more tool that enables them to identify potential entry and exit points for a security.

Ask an Expert about Dragonfly Doji

If you have a question about Dragonfly Doji, then please ask Paul.

If you have a question about Dragonfly Doji, then please ask Paul.

Ask an Expert about Dragonfly Doji