What Is Aggregate Demand?

Aggregate demand is the total demand for goods and services in an economy. It's an economic term that describes the total amount of purchases.

What Are the Four Components to Aggregate Demand?

Consumer spending is what families spend on non-investment products. This can include any number of items.

Like consumers, businesses may be more likely to make a purchase when interest rates are low. With that, the interest rate environment could impact this component of aggregate demand.

Government spending includes purchases of goods and services. However, it does not include transfer payments, like Medicaid and Medicare.

The demand for imports and exports can be affected by fluctuating currency exchange rates. Also, as the value of the U.S. dollar falls, imports will become more expensive and potentially affect demand.

How Do You Calculate Aggregate Demand?

Aggregate demand is the sum of its four components and is calculated as:

The law of demand states that consumers will want more goods and services when prices decline. However, there are other factors that affect demand, including income, prices of related goods or services, tastes, and expectations.

Another factor that influences aggregate demand is the total number of buyers in the economy.

The aggregate demand curve can be visualized as a chart.

Take a closer look at this chart: 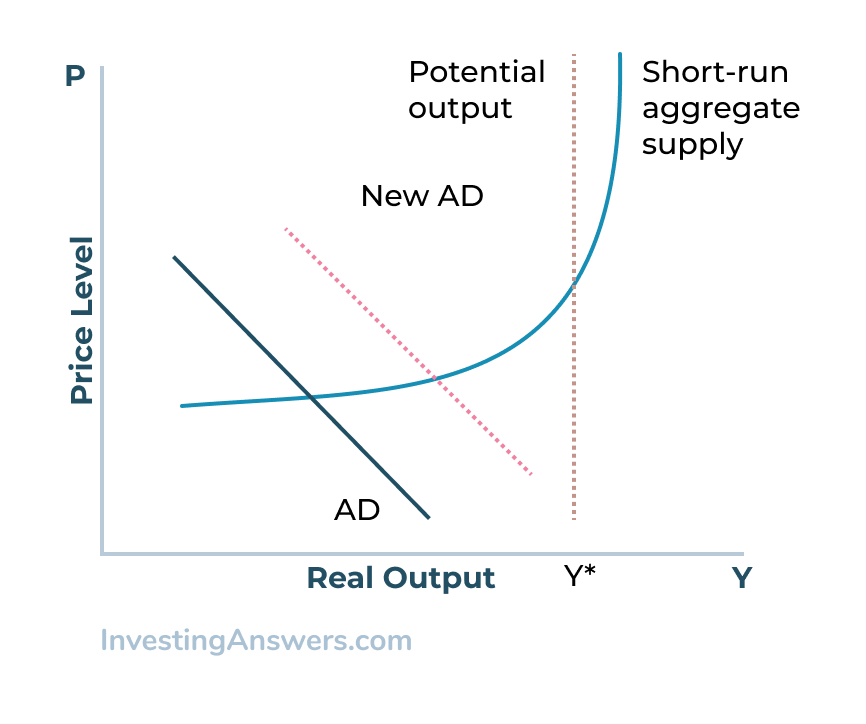 With the right information available, it is possible to calculate the aggregate demand of any economy at any point in history. As you explore swings in aggregate demand, you can uncover patterns.

Let's consider the U.S. economy in the 1920s. In the early 1920s, the aggregate demand was increasing at a rapid rate. In part, this rapid expansion was due to the acceleration of American manufacturing that came with mechanization.

When the Great Depression began in 1929, aggregate demand dropped steeply.

Aggregate demand is one factor that can cause inflation to rise or fall.

On the flip side, shrinking aggregate demand can cause inflation to slow.

The connection between growth and aggregate demand has been a controversial economic theory for many years.

As it is quantified by market values alone, aggregate demand represents consumption at a set price position -- but doesn't reflect the quality or standard of living. Also, it ignores demands that are met outside of legitimate markets, which can represent significant economic activity.

Ask an Expert about Aggregate Demand

Why March Madness Isn't Always an Economic Win
How to Spot a Modern-Day Monopoly
Leading Economic Indicators Cheat Sheet
Why a Dollar Isn't Always Worth a Dollar
Understanding "Reaganomics"
Ask an Expert
All of our content is verified for accuracy by Rachel Siegel, CFA and our team of certified financial experts. We pride ourselves on quality, research, and transparency, and we value your feedback. Below you'll find answers to some of the most common reader questions about Aggregate Demand.

Can Aggregate Demand be Zero?

It is technically possible to arrive at zero. However, given that there will always be some consumer, business, and government spending, that would only happen if an economy imported everything its members consumed: an extreme and very unlikely scenario.

Are Aggregate Demand and GDP the Same?

What is the Difference Between Aggregate Demand vs. Aggregate Supply (GDP)

If you have a question about Aggregate Demand, then please ask Rachel.

Ask an Expert about Aggregate Demand