The Surprising Formula Every International Investor Must Know

Mexico and Brazil had a big problem several decades ago.

They had a small but very wealthy elite class and a massive underclass. The middle class in these countries was relatively small, leading to low levels of domestic consumption.

Since then, a set of far-sighted government policies has helped to create thriving middle classes in these countries, and it's no coincidence that their stock markets have surged: Brazil's Bovespa market index has surged 500% over the past decade, while Mexico's stock market has risen a heady 600%. As a result, in both countries, exciting and rewarding investments await the investor.

Economists can even quantify the middle-class gains in these countries using a little-known ratio called the Gini coefficient. Developed by an Italian mathematician Corrado Gini a century ago, it's a formula that assigns a value of zero to a society where the wealth is spread amongst all citizens. Very complex math that goes into determining wealth distribution -- suffice it to say it's far more complex than simply measuring the wealth of the top and bottom of the population.

The index applies a theoretical value of 100 to any country where all of the wealth is held by one person. Of course, no country has hit that mark, but South Africa's 63 rating -- the highest of any major economy in the world, according the World Bank -- is fairly alarming.

Wondering how the United States measures up? As of 2010, its Gini coefficient index stood at 40.8. That's right in the middle of the global rankings, according to the World Bank's methodology. Other groups that track the Gini coefficient have noted that the U.S. score has worsened in recent years. Historically -- and anecdotally -- there is evidence that much of the wealth created in the U.S. in the past two decades has been accrued by America's wealthiest 10%. A rise in the Gini coefficient bears that out.

Should this be cause for concern? On the face of it, unfettered capitalism has built a pretty strong track record over the past half-century as all members of society in the United States, Western Europe and Japan have seen rising living standards across the board. 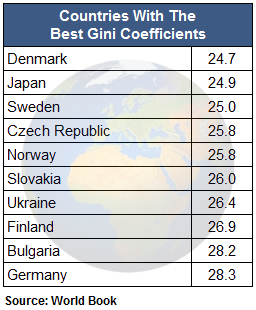 Yet a key concern, beyond the basic notion of fairness, is the erosion of a broad base of taxpayers that can support a government's revenue base. Inflation-adjusted income for many Americans has been stagnant for two decades. Had their incomes risen in tandem with those of the top earners, we may not be facing a budget crisis right now. Regardless of your politics, it seems reasonable for any country to strive for a robust middle class.

In some countries, governments have worked assiduously to ensure that almost every citizen is within the reach of a middle-class lifestyle. Take Norway. That country has reaped hundreds of billions in profits from its lucrative North Sea oil fields. The Norwegian government has used those earnings to shore up a wide variety of social services, from education to retirement to job training.

As a result, Norway had one of the world's lowest Gini coefficients in the world in 2008, at just 25.8, the fifth-best score in the world.

The first table here shows how it compares to the countries with the lowest Gini coefficients in the world. 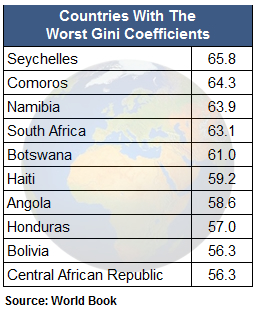 At the other end of the spectrum, Africa is home to countries that have massive wealth inequality. South Africa's Gini coefficient has actually worsened in the post-apartheid era.

The countries with the highest Gini ratios often also have the most political turmoil. For those of us in the West who are accustomed to a broad-based middle class, travel to such countries can take an emotional toll as you come up against entrenched poverty. (I still have many unpleasant memories of childhood trips to Haiti.)

But a poor Gini score doesn't mean that a country is a bad investment arena. It's the direction of the Gini score that counts, as Mexico and Brazil can attest.

The Investing Answer: As an investor, seek a country's Gini ratio as you research the prospects for various emerging markets. Countries like Brazil and Mexico, which historically had very high Gini ratios, have made sharp improvements in this area and, as a result, have delivered solid investment returns in recent years.

Don't Buy A Dividend Stock Unless You Know These 10 Things...
7 Ways to Stop a Foreclosure on Your Home
Protecting Your Partner's Assets? This Move Can Backfire In A Big Way
4 Strategies to Profit from This Chaotic Earnings Season
Shrewd Philanthropy: How to Give Without Getting Taken
Ask an Expert
All of our content is verified for accuracy by Paul Tracy and our team of certified financial experts. We pride ourselves on quality, research, and transparency, and we value your feedback. Below you'll find answers to some of the most common reader questions about The Surprising Formula Every International Investor Must Know.

If you have a question about The Surprising Formula Every International Investor Must Know, then please ask Paul.

If you have a question about The Surprising Formula Every International Investor Must Know, then please ask Paul.

How Do I Compare Life Insurance Quotes? Before selecting a life insurance policy, it’s wise to understand all of the options available to you.

Our top 3 identity theft protection services can help you protect your identity – without breaking the bank.

The best gas credit cards can put cash back in your pocket or earn rewards you can redeem for free travel.

Wondering if it's a good time to refinance your home? Here's how to lock in the best refinancing rates for your mortgage.

The best international travel rewards credit cards not only earn rewards towards free travel but come with access to valuable perks that enhance your trips.

Credit cards can offer great incentives like cash back, travel points, and more, but choosing the right card (that meets all of your needs) is an important decision. This comprehensive guide to the best credit cards of 2021 will help you with your search for the perfect card.