In the early 1970s, the rates for 30-year fixed-rate mortgages hovered around the 7% mark. By the late 1970s, high inflation had taken hold in the economy. With that, the Federal Reserve chose to increase the federal funds rate. Mortgage rates continued to rise towards the historic peak of 18.83% in 1981.

Since the historic peak, consumers have seen some fluctuation. However, the extremely dramatic increase in rates seen in the early years of tracking hasn't been repeated on record. 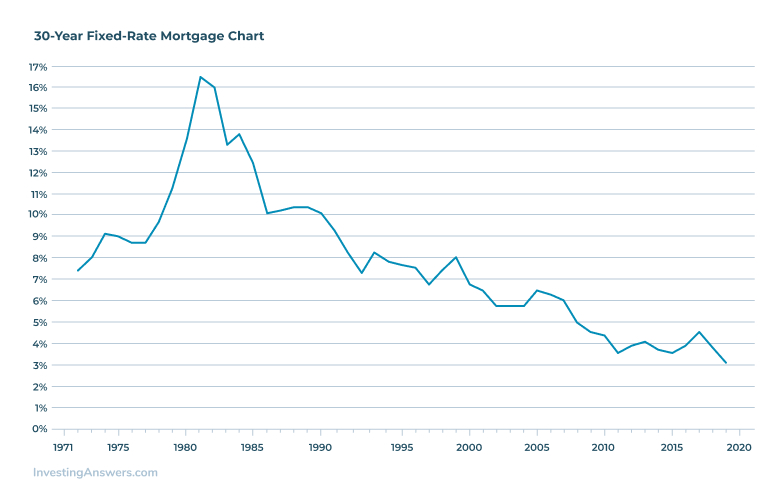 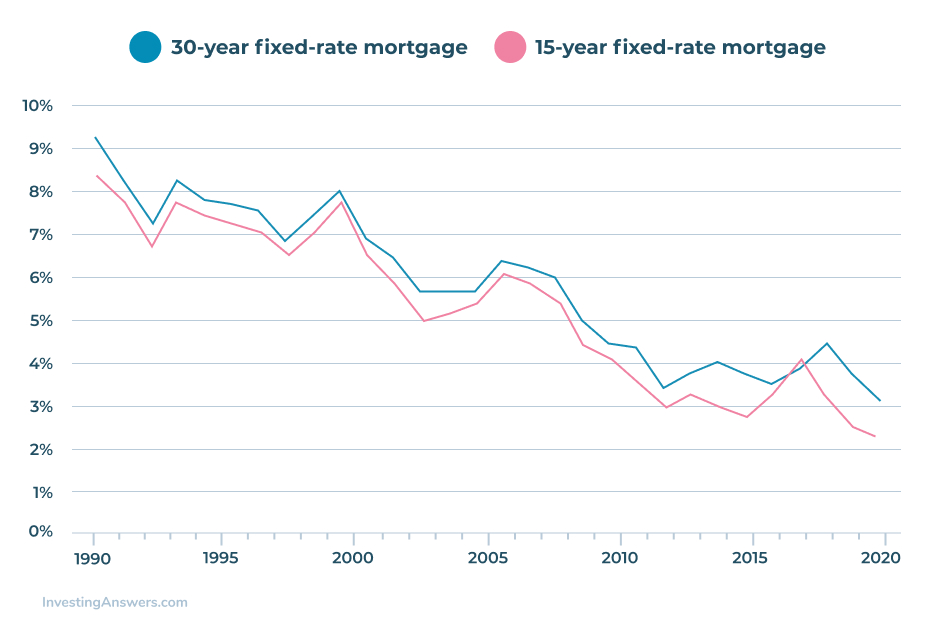 Based on the data made available by Freddie Mac, the interest rates of 30-year fixed mortgages are always higher than 15-year interest rates. Many homebuyers choose to lock in a 30-year fixed-rate mortgage even with the slightly higher interest rate. The longer-term means a lower monthly payment, which is attractive to many buyers.

The lower rates offered through 15-year mortgages can make it possible to save in interest payments over the lifetime of the loan. But the shorter term means a higher payment. And many homebuyers are unable to fit the larger monthly payment into their budget. 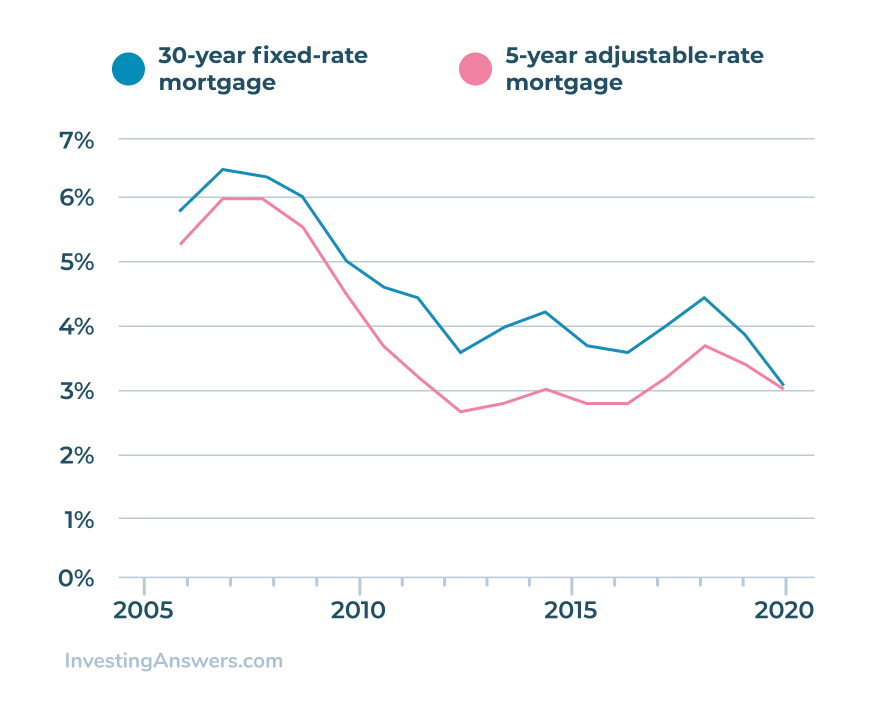 Adjustable-rate mortgages can provide the opportunity to save money on interest in the short term. However, rate fluctuations can make it difficult to budget for your future mortgage payment beyond the first five years.

What is the Highest Mortgage Rate in History?

The highest recorded mortgage rate for 30-year fixed-rate mortgages was 18.45%. Freddie Mac recorded this new height in 1981. More recently, the lowest average mortgage rate in history was recorded at 2.68% in 2020.

The difference between these two interest rates could make or break a homebuyer's dreams.

As historical mortgage rates have swung back and forth, homebuyers have been forced to face the consequences. Not only do changing interest rates have an impact on monthly budgets, but also the number of potential home shoppers.

In many instances, low interest rates have caused an increase in home buyers because homes become more affordable. With an increase in interested buyers, the demand typically tends to push home prices higher. However, it is important to note that this general correlation doesn't always appear based on unique economic circumstances.

For example, during the Great Recession, there was a period of time when interest rates and prices fell in tandem. With the numerous factors affecting home prices, mortgage rates are not the only piece of the puzzle.

With dropping interest rates throughout 2020, the real estate market saw a dramatic rise in home prices. As mortgage rates fell, buyers were able to fit a larger mortgage into their monthly budget. In fact, the median home price rose from $270,400 in February 2020 to $313,000 in February 2021.

4 Savings Tips Mortgage Lenders Don't Want You to Know
Closing on a Mortgage? This Sneaky Lender Trick Could Cost You Thousands
How 8% Mortgage Rates Will Change the Face of Homeownership
How to Take Advantage of the Mortgage Rates of a Lifetime
9 Tactics for Headache-Free House Hunting
Ask an Expert
All of our content is verified for accuracy by Mark Herman, CFP and our team of certified financial experts. We pride ourselves on quality, research, and transparency, and we value your feedback. Below you'll find answers to some of the most common reader questions about Historical Mortgage Rates and How they Affect the Housing Market .

What Causes Changes in Mortgage Rates?

The Federal Reserve has also impacted mortgage rates directly via "quantitative easing", QE. In the midst of both the 2008 recession and the Covid-19 pandemic, the Fed essentially injected funds into the U.S. economy to help keep interest rates low. QE is accomplished by buying billions or even trillions of dollars of consumer debt in the form of mortgage bonds, which can make credit more accessible for consumers.

If you have a question about Historical Mortgage Rates and How they Affect the Housing Market , then please ask Mark.

Closing on a Mortgage? This Sneaky Lender Trick Could Cost You Thousands

If you or someone you know is thinking about getting a home mortgage, you may want to know about the thousands of dollars in hidden charges that some lenders are quietly adding to mortgage loans after they show potential borrowers the initial terms of the loan. Read More ›

How Much Mortgage Can You Really Afford? These 2 Simple Formulas Will Tell You

Many people still consider home ownership to be "The American Dream." However, the dream can quickly become a nightmare if you are stuck with a mortgage you can't afford. Read More ›

The 5 Worst Mistakes Almost Every Homebuyer Makes (And Tips to Avoid Them!)

Mistakes are difficult to avoid in something as complex as home buying, especially for the first time home buyer. Read More ›