What is Uncle Sam?

Uncle Sam is a fictional character who represents the United States government. His predecessor was a character named Brother Jonathan.

How Does Uncle Sam Work? 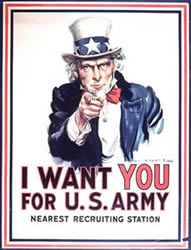 Uncle Sam first appeared in the 1820s. Though many artists drew the character in a variety of political cartoons during that time, the artist Thomas Nast is most commonly credited for creating the image most familiar to us today. Nast's first illustration of Uncle Sam was published in the November 20, 1869, edition of Harper's Weekly. Artist James Montgomery Flagg also created a famous image of Uncle Sam wearing a top hat and blue jacket and pointing a finger at the viewer in the famous "I Want YOU for U.S. Army" poster.

The name "Uncle Sam" is associated with Samuel Wilson, a meat packer from Troy, New York. Wilson supplied beef to the U.S. Army during the War of 1812 and he stamped the barrels with "U.S." Apparently, soliders began joking that initials meant that the food was from "Uncle Sam." The media published this, which helped the term become the official nickname for the U.S. government.

Image courtesy of the Library of Congress.

Why Does Uncle Sam Matter?

Uncle Sam is not just a symbol of the U.S. government. He is also a patriotic symbol of the unity and strength of the United States.

Ask an Expert about Uncle Sam

Profit From the U.S. Budget Spending with Defense and Security Contractors
Understanding "Reaganomics"
5 Financial Perks of Congress You Won't Believe Are Legal
The One Thing Keeping Some U.S. Troops From Financial Ruin
10 Countries Drowning In Government Debt
Ask an Expert
All of our content is verified for accuracy by Paul Tracy and our team of certified financial experts. We pride ourselves on quality, research, and transparency, and we value your feedback. Below you'll find answers to some of the most common reader questions about Uncle Sam.

If you have a question about Uncle Sam, then please ask Paul.

If you have a question about Uncle Sam, then please ask Paul.

Ask an Expert about Uncle Sam