This is a momentum indicator that shows the location of the current close relative to the high/low range over a set number of periods.

Momentum indicators try to identify turning points by measuring how fast prices are rising or falling.

How Do Stochastics Work?

The calculation of the stochastic can be confusing.

First a value known as %K is calculated with this formula:

A 3-period moving average of %K is then calculated and called %D (no one really knows where the names came from, but they are widely used in almost all software packages). A buy signal is given when %K crosses above %D and sell signals occur when %K falls below %D.

An example is shown in the image below. 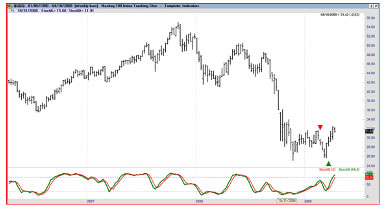 Image: The stochastics indicator offers clear trading signals. Only one trade is highlighted in this chart, but there are more than a dozen signals shown.

Why Do Stochastics Matter?

One problem with using indicators to generate trading signals is that there are a large number of losing trades. One way to improve the odds of a winning trade is to ignore signals unless the market is at an oversold or overbought extreme.

Ask an Expert about Stochastics

Using the Z-Score to Predict the Next Enron
A Primer on Present Value and Its Many Uses
How to Calculate Present Value in Excel & Financial Calculators
The Top 4 Places CFOs Hide Fudged Numbers
Why Discounted Cash Flow Is the Best Value Gauge for Fast-Growing Companies
Ask an Expert
All of our content is verified for accuracy by Paul Tracy and our team of certified financial experts. We pride ourselves on quality, research, and transparency, and we value your feedback. Below you'll find answers to some of the most common reader questions about Stochastics.

If you have a question about Stochastics, then please ask Paul.

If you have a question about Stochastics, then please ask Paul.

Ask an Expert about Stochastics