What is a Major Uptrend?

A major uptrend, or bull market, is when financial assets and markets -- as with the broader economy -- move in an upward direction for extended periods of time.

How Does a Major Uptrend Work?

A major uptrend is when each successive advance of the primary trend peaks and troughs higher than the one preceding it, and can last from several months to several years. This is illustrated in Figure 1 below. 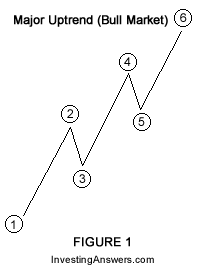 Within a major uptrend, several secondary reactions may occur against the trend, lasting for a few days, weeks or even months, but they don't necessarily change the definition of the overall trend.

In the stock market, for example, prices may drop precipitously, even during a powerful uptrend, for several weeks at a time. This is known as a 'correction.' If the uptrend is still in place, a rally will then ensue.

If a rally movement doesn’t succeed in breaking through the previous high, and the market subsequently declines to fall below a previous low, the movement has switched from a major uptrend to a major downtrend.

Why Does a Major Uptrend Matter?

It is difficult for investors to precisely time major uptrends because markets often rise higher than most investors and analysts anticipate -- and sometimes fall lower than they could possibly fathom.

Most investors are counseled to never bet against a major uptrend. Trends can last for long periods of time, so as a general rule, investors should not buck the trend, which is akin to swimming against the tide.

Ask an Expert about Major Uptrend

All of our content is verified for accuracy by Paul Tracy and our team of certified financial experts. We pride ourselves on quality, research, and transparency, and we value your feedback. Below you'll find answers to some of the most common reader questions about Major Uptrend.

If you have a question about Major Uptrend, then please ask .

Ask a questionRead more from Paul