What is a Major Downtrend?

A major downtrend, or bear market, is when financial assets and markets -- as with the broader economy -- fall steadily for an extended period of time.

How Does a Major Downtrend Work?

A major downtrend is when each successive decline of the primary trend carries the market to lower lows and lower highs, lasting from several months to several years. This is illustrated in Figure 1 below. 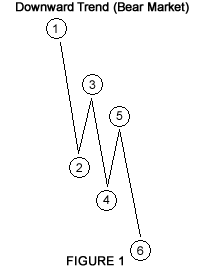 Within a major downtrend, several secondary reactions may occur against the trend, lasting for a few days, weeks or even months, but they don't necessarily change the definition of the overall trend. These movements are considered micro trends, such as daily movements and other short-term price fluctuations.

In the stock market, for example, prices may rise precipitously, even during a powerful downtrend, for several weeks at a time. This is known as a "rally."

If a rally doesn’t succeed in breaking through the previous high and the market subsequently declines to fall below a previous low, the price movement is still considered a major downtrend.

Why Does a Major Downtrend Matter?

It is difficult for investors to precisely time major downtrends. That's because markets often rise higher than most investors and analysts anticipate -- and sometimes fall lower than they could possibly fathom.

Ask an Expert about Major Downtrend

Start Swing Trading Today
The Six Biggest Mistakes Technical Traders Make
Swing Trading Tips to Get You Started
Principles of Technical Analysis: The Predictive Power of the RSI Trendline
How Swing Traders Harness the Power of Trendlines
Ask an Expert
All of our content is verified for accuracy by Paul Tracy and our team of certified financial experts. We pride ourselves on quality, research, and transparency, and we value your feedback. Below you'll find answers to some of the most common reader questions about Major Downtrend.

If you have a question about Major Downtrend, then please ask Paul.

If you have a question about Major Downtrend, then please ask Paul.

Many individuals think that short-term trading offers the keys to riches. Read More ›

How to Succeed Where 1,471 Hedge Funds Failed

My phone is an old Nokia (NYSE: NOK) about the size of a small brick. Read More ›

What does it mean to be a "trader"? For some investors, the term conjures up visions of men hunched over their desks surrounded by countless computer monitors, all of which are showing multiple tiny-print charts that are largely indecipherable to the average person. Read More ›

Swing Trading Tips to Get You Started

This article provides you with a closer look at swing trading strategies and principles. Read More ›

Ask an Expert about Major Downtrend