What is an L-Shaped Recovery?

An L-shaped recovery refers to substantial losses in economic growth followed by a period of stagnation. Represented graphically, GDP data looks like the letter "L."

How Does an L-Shaped Recovery Work?

For example, suppose country ABC experiences a decline in gross domestic product (GDP) from $100 billion to $80 billion between 2002 and 2003. If country ABC's GDP remains at $80 billion until 2008, the country experienced an L-shaped recovery as shown below: 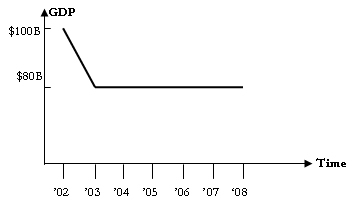 Why Does an L-Shaped Recovery Matter?

The most famous example of an L-shaped recovery is that experienced by the Japanese economy through the 1990s and beyond. Following an abrupt decline in productivity, Japan's economy was plagued by stagnant productivity for several consecutive years.

Ask an Expert about L-Shaped Recovery

High Inflation Is Coming -- Here's How To Protect Your Wealth Now
Understanding Economic Indicators
10 Facts About China You Won't Believe (But You Should)
John Maynard Keynes: The Man Who Transformed the Economic World
The World's Fastest-Growing Economies
Ask an Expert
All of our content is verified for accuracy by Paul Tracy and our team of certified financial experts. We pride ourselves on quality, research, and transparency, and we value your feedback. Below you'll find answers to some of the most common reader questions about L-Shaped Recovery.

If you have a question about L-Shaped Recovery, then please ask Paul.

If you have a question about L-Shaped Recovery, then please ask Paul.

Ask an Expert about L-Shaped Recovery