Trendlines are one of the most common and helpful tools in a trader's kit. They are used to show a stock's upwards, downwards, and sometime sideways, movement.

As I mentioned in my recent article, The Trend Is Your Friend (where I described trendlines in-depth), confirmed trendlines are drawn by connecting a cycle low, or high, with at least two other of the highest or lowest points on a chart, to create a line of best fit.

Just as a trendline is drawn parallel to the stock's movement on a price chart, it can also be drawn on the RSI line.

The chart of Conceptus Inc (Nasdaq: CPTS) provides a good example of why traders should pay attention to the breaking of an RSI trendline. 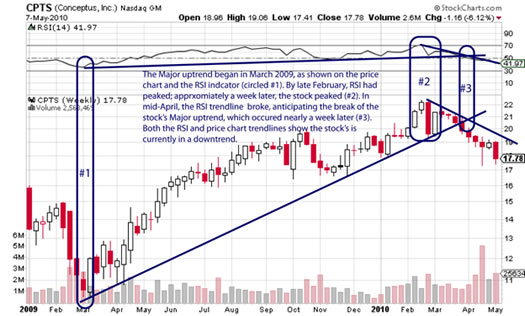 During the next year, both the stock and RSI climbed steadily higher. CPTS hit a peak of $22.44 the last week of February, but, RSI peaked about a week beforehand, near the overbought 70 level. Immediately after, RSI began falling, coincident with price.

The major RSI up trendline broke in mid-April, which had lasted more than a year. That trendline break took place about one week ahead of the break in the uptrend line of the stock. note how the breaking of the RSI trendline warned of the coming reversal in the stock's uptrend.

CPTS is currently below its intermediate-term downtrend line. RSI is below 50 and dropping, providing an indication the stock will likely continue to fall. Since the deeply oversold level on RSI is not met until 30, CPTS' price could deteriorate significantly from current levels.

By using RSI trendlines, you can add anticipate an underlying trendline break. When it does occur, you have additional and potentially profitable certainty that you have read the chart -- and the stock's direction -- correctly.

If you want to learn more about using technical analysis in your portfolio, check out: Double Top Formations Explained

MACD, Options, Short Squeezes -- Strategies for Advanced Traders
Start Swing Trading Today
Is That Stock Price Too High? This Easy Tool Can Tell You
Top Tools for Successful Technical Analysis
Principles of Technical Analysis: The Cup-and-Handle Pattern
Ask an Expert
All of our content is verified for accuracy by Paul Tracy and our team of certified financial experts. We pride ourselves on quality, research, and transparency, and we value your feedback. Below you'll find answers to some of the most common reader questions about Principles of Technical Analysis: The Predictive Power of the RSI Trendline.

If you have a question about Principles of Technical Analysis: The Predictive Power of the RSI Trendline, then please ask Paul.

If you have a question about Principles of Technical Analysis: The Predictive Power of the RSI Trendline, then please ask Paul.

The covered call strategy is a reliable way to generate income in your investment account on a monthly basis. Read More ›

How to Succeed Where 1,471 Hedge Funds Failed

My phone is an old Nokia (NYSE: NOK) about the size of a small brick. Read More ›

Options: When to Sell, Not Buy

Selling options is an aspect of trading that investors should become familiar with. Read More ›

Ask an Expert about Principles of Technical Analysis: The Predictive Power of the RSI Trendline