What is a Relative Strength Index (RSI)?

The Relative Strength Index (RSI) was first developed by renowned technical analyst J. Welles Wilder. It is not to be confused with relative strength, which compares a stock's price performance to that of an overall market average, such as the S&P 500. Instead, the RSI analyzes the recent performance of a security in relation to its own price history. RSI is a valuable tool to determine overbought/oversold levels.

How Does a Relative Strength Index (RSI) Work?

There are five major principles of RSI analysis:

1) When RSI goes above 70 or below 30, it indicates that a stock is overbought or oversold and vulnerable to a trend reversal.

4) RSI forms patterns, such as triangles or head and shoulders tops and bottoms. Breakouts from these patterns on the daily chart often precede the price breakout by one or two days -- providing the swing trader valuable advance notice.

These four features of RSI often come together to create a high-probability buy or sell signal. Thus, a stock may go over 70, create bearish divergence, form a descending triangle top, and then complete a failure swing. These signals often predict the signal on the price chart.

5) A final use of RSI mentioned in Wilder's book, New Concepts in Technical Analysis, is that 'trendlines on the bar chart often show up as support lines on RSI.'

A corollary of this point, not mentioned by Wilder, is that the RSI line itself can be interpreted by trendline analysis. A break in the RSI trendline can provide a signal that often predicts action on the price chart.

The chart of the Nasdaq below shows the price chart superimposed on the RSI indicator. A trendline is drawn under the RSI line. When the RSI trendline breaks, it will be an advance warning that the Composite is vulnerable to a sharp fall. 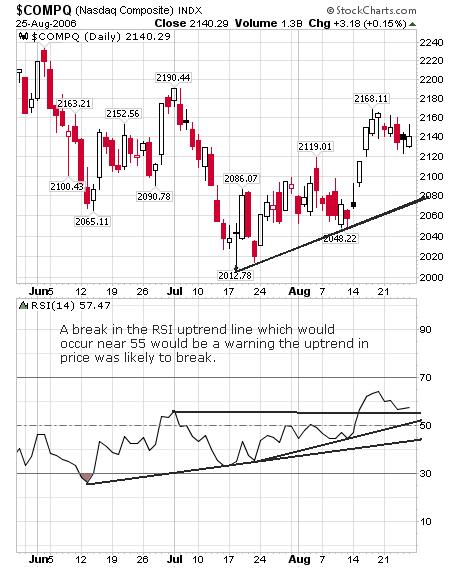 Why Does a Relative Strength Index (RSI) Matter?

RSI trendlines and support levels supplement the four major tenets of RSI analysis. Together, these five applications of RSI can give traders valuable lead time to take advantage of a pending trend reversal.