The Semper Augustus was a beautiful flower.

It had midnight-blue petals with a pure white band at the tips and crimson flashes.  According to Mike Dash in his book, Tulipomania: The Story of the World's Most Coveted Flower & the Extraordinary Passions It Aroused, in 1624 a man who owned the only 12 Semper Augustus bulbs in existence was offered 3,000 guilders for just one of the bulbs, the equivalent to what a top-notch craftsman would make in a year. The Dutch tulip bubble was well underway.

In 1593, an unknown trader imported tulip bulbs into Holland from Turkey, and the Dutch almost immediately fell in love with the flower. Though they were pricey from the start, the mania escalated to the next level when a non-fatal virus infected the flowers, altering their color and creating a wide variety of patterns, some quite rare.

People began mortgaging their land and trading in their savings in order to buy rare and exotic bulbs, and by February 1637, the tulip bubble was reaching its peak. But once a few people began taking profits on their "investments," the bubble began to burst. Eventually sellers could not find willing buyers. The price of a tulip bulb plunged, ultimately reaching the price of an onion.

What is a Bubble?

First, is the "stealth phase," where the asset is tracking with its underlying fundamentals. Next comes the "awareness phase," when the value of the asset begins to rise above its fundamental value. In the third phase, the asset value takes off as the media begins to mention its rising value. An ever increasing number of investors extol the virtues of the investment as they join the cause. 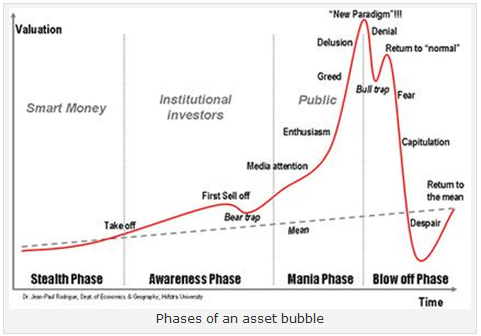 From an economic point of view, an asset bubble forms when the price people are willing to pay for an asset far exceeds the future discounted cash flows from the asset.

During the dot-com bubble, many investors thought internet companies were changing the fundamentals of business. The value of the Nasdaq Composite rose to an all-time high as many technology companies saw the price of their shares climb to unrealistic levels, some with P/E ratios greater than 100. Once investors realized that the future discounted cash flows were well below the price of the shares of the company, stock prices started to fall.

As the chart of the Nasdaq shows, the dot-com bubble followed the pattern described by Dr. Rodrique: 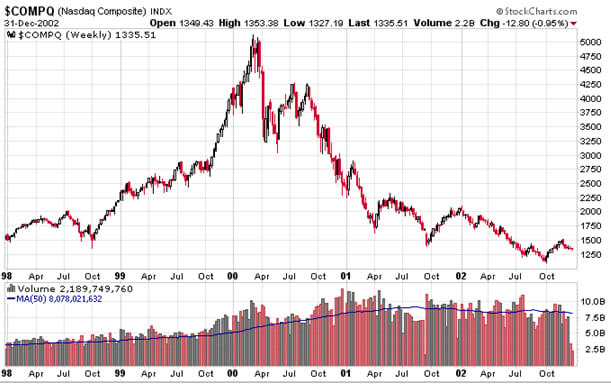 This Time It's Different

The Austrian School of Economics believes asset bubbles occur when there is an extended period of low interest rates coupled with an expansion of credit. The availability of cheap money encourages speculation in one or more asset classes causing the price to escalate rapidly exceeding their underlying intrinsic value. This phenomenon manifested itself in the recently deflated housing bubble.

I remember reading an interview in 2007 that quoted real estate agents in Miami making the claim that "this time it's different." After all, they said, everyone wants to buy a home in Florida. But as shown in the S&P/Case-Shiller chart for Miami*, the Florida housing market wasn't special or "different" -- the price of homes began to turn down in 2007.

Even with just a slight initial decrease in prices, many speculators found they owned homes worth less than the mortgage. A rush to sell pushed down prices ever more rapidly, and economic reality caught up with them as prices returned to pre-bubble territory. The inflation-adjusted home price in Miami fell from $430,000 at the high in late 2006 to $220,000 in early 2009. 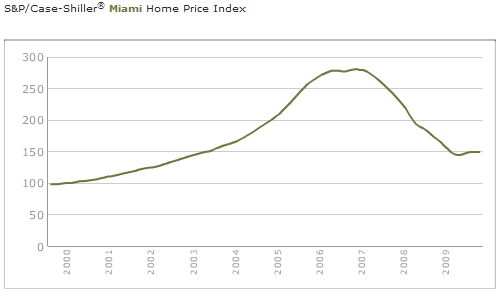 Any Bubble in the Works Today?

Since 2001, the price of gold in dollars as shown in the chart below has risen more than four-fold. Is it in a bubble?

But perhaps the better question is, what is the underlying fundamental value of gold? Gold is an asset that does not generate any cash flow streams, meaning you cannot use traditional discounted cash flow analysis to determine its intrinsic or fundamental value.

The value people place on gold comes from its use in industry, in jewelry and as a store of value. According to the World Gold Council, for the 2nd quarter of 2010, the supply of gold came in at 1,132 metric tonnes, while the demand for gold over the same period was 1,047 metric tonnes, leaving an excess of 84 tonnes of supply. Since supply of gold outstrips demand it is logical to assume the intrinsic value of gold should decline rather than rise.

I believe that given the escalation in the price of gold, it is in a bubble. Over the last 10 years, gold has passed through the stealth and awareness phases, and given its rapid climb in the last two years and the amount of press gold receives, it is clearly in the mania phase.

[Since it's not supply/demand issues driving the price of gold, it must be something else. Click here to see what I believe is The Secret Factor Driving Gold Prices.] 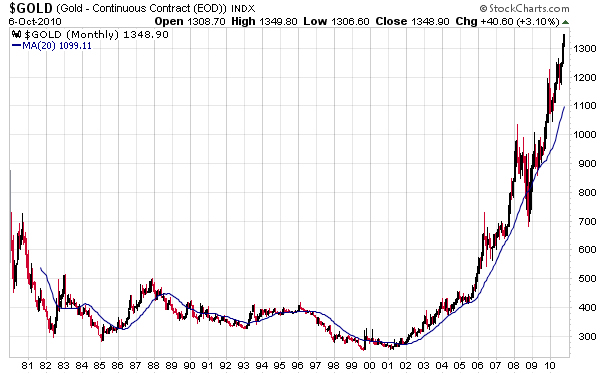 Assuming gold will follow the pattern of other bubbles, investors should look for a pullback in the price followed by another attempt to rise. If the price cannot climb above the recent high before it turns down, this trading pattern will tell you the blow off phase is in place.

How to Take Advantage of Bubbles

Asset bubbles have been with us for centuries. They will be with us well into the future. While the majority of the investors in each bubble believe that the price increase can continue without end, prudent investors recognize the end of a bubble comes swiftly.

Bubbles can be a great way to make money if you get in during the awareness phase and get out before you reach the final blow off. The key to success is to not be trapped when the blow off begins. If you believe you are benefiting from a bubble, force yourself to take half of your profits as greed sets in. Then set good trailing stops and be ready to abandon ship if the price trend breaks down.

Asset bubbles create challenges and opportunities, but the emotion that comes with bubbles can blind investors. It takes a disciplined investor to overcome the excitement of a rapidly climbing asset price. To participate and win it takes discipline. Be sure you are up to the challenge before venturing into bubble territory.

10 Facts About China You Won't Believe (But You Should)
Quantitative Easing: 9 Reasons It's Bad for the U.S. Economy
Structural Unemployment Is Here to Stay
Understanding Economic Indicators
Adam Smith and the Wealth of Nations: The Birth of Economics
Ask an Expert
All of our content is verified for accuracy by Paul Tracy and our team of certified financial experts. We pride ourselves on quality, research, and transparency, and we value your feedback. Below you'll find answers to some of the most common reader questions about Anatomy of a Bubble: Position Yourself to Profit Before the Next One Pops.

If you have a question about Anatomy of a Bubble: Position Yourself to Profit Before the Next One Pops, then please ask Paul.

If you have a question about Anatomy of a Bubble: Position Yourself to Profit Before the Next One Pops, then please ask Paul.

Ask an Expert about Anatomy of a Bubble: Position Yourself to Profit Before the Next One Pops