What is a Point-and-Figure Chart?

A point-and-figure chart is a graph which records discrete price changes without accounting for an associated period of time. They are often used in technical analysis as a means of predicting future price changes.

How Does a Point-and-Figure Chart Work?

A point-and-figure chart records and displays specific whole-number changes in the price of an asset. In other words, unless a change is large enough to accommodate this amount, referred to as a box, the change is not recorded (e.g. a change of $0.50 where a box size is $1.00 would not be recorded). The price scale is on the y-axis with no time series or other variable on the x-axis. Upward price changes are generally shown with an "X" and downward changes with an "O" as shown below: 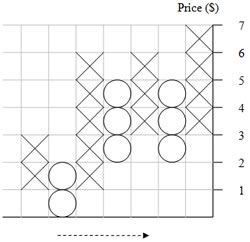 Changes are recorded from left to right with each column exclusively displaying Xs or Os as price changes occur. Consecutive changes in the same direction are recorded in the same column. For this reason, a change in the direction of a price movement (i.e. from positive to negative) is represented by a new column. Multiple columns, therefore, always alternate between Xs and Os and no two consecutive columns can begin or end on the same line (i.e. price level).

Why Does a Point-and-Figure Chart Matter?

Point-and-figure chart patterns indicate imminent increases or decreases based on price history. In this respect, point and figure charts are a tool used to help traders and investors determine the best time to buy or sell.

Ask an Expert about Point-and-Figure Chart

Swing Trading Support & Resistance Secrets
Finding Shorts with Technical Analysis
Principles of Technical Analysis: The Trend Is Your Friend
How to Use Candlesticks for Successful Swing Trading
Where is the Bottom? Technical Analysis May Have the Answer
Ask an Expert
All of our content is verified for accuracy by Paul Tracy and our team of certified financial experts. We pride ourselves on quality, research, and transparency, and we value your feedback. Below you'll find answers to some of the most common reader questions about Point-and-Figure Chart.

If you have a question about Point-and-Figure Chart, then please ask Paul.

If you have a question about Point-and-Figure Chart, then please ask Paul.

What Happens When Your Stock Goes Negative?

Wondering what happens if your stock goes down? Our expert financial tips walk you through this common query.    Read More ›

Warren Buffett is quick to remind investors that derivatives have the potential to wreak havoc whenever the economy or the stock market hits a really rough patch. Read More ›

Before investing in the foreign exchange (forex) market, you need to know the following basics. Read More ›

Ask an Expert about Point-and-Figure Chart