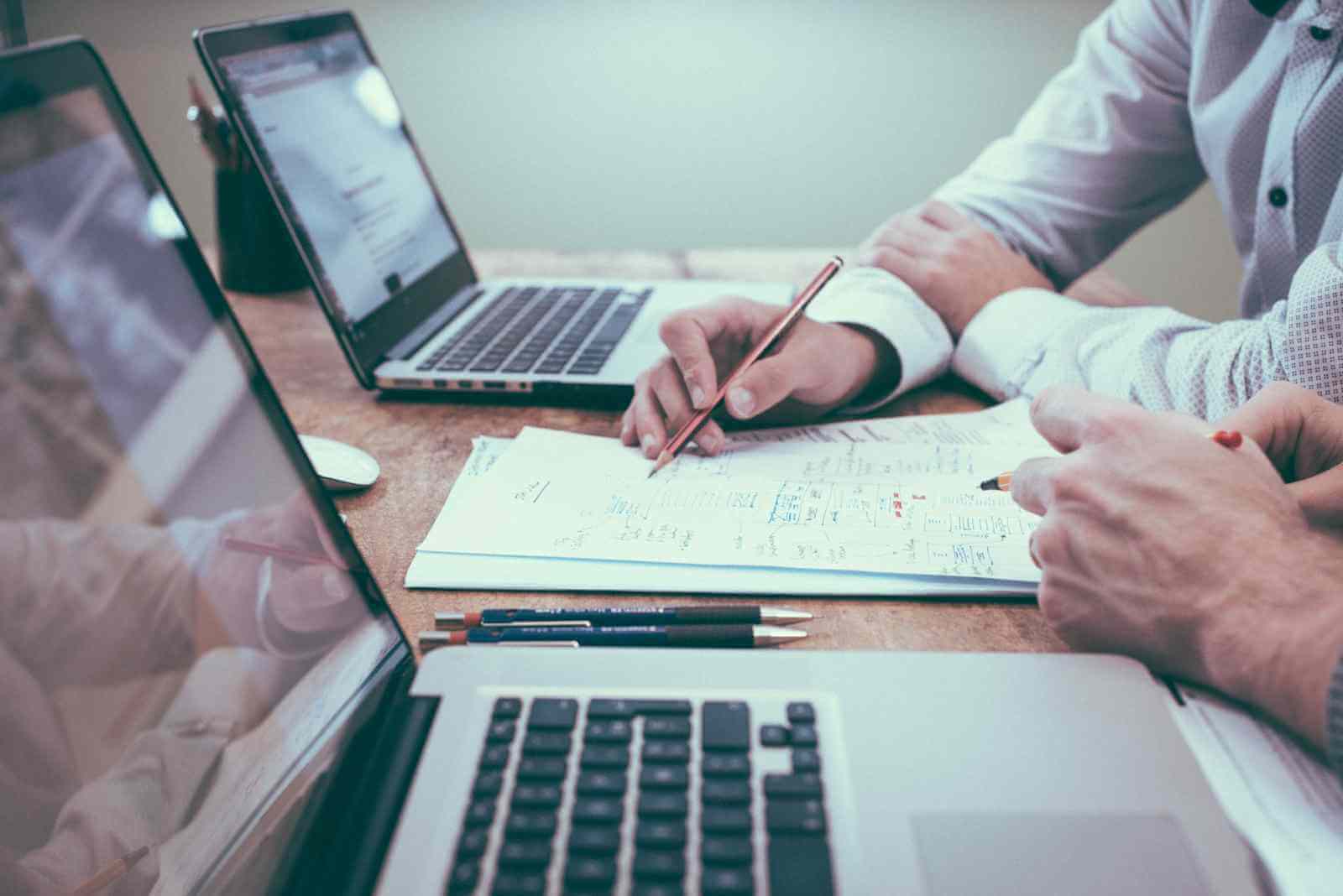 What is a Hammer Candlestick? 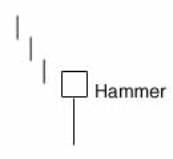 How Does a Hammer Candlestick Work?

During the period of the hammer candlestick, the stock or index experiences strong selling. As the day or week goes on, however, it recovers and closes near the unchanged mark -- and sometimes ecien higher. In these cases, the market is potentially "hammering" out a bottom.

To be an official hammer, the lower shadow must be at least twice the height of the real body. The larger the lower shadow, the more significant the candle becomes. The IMF is also more noteworthy if the lower shadow penetrates the bottom Bollinger Band ® and the real body closes back within the band. On a weekly chart, a hammer candle formed near the 40-week moving average suggests that average is seen by the market as strong support.

As with all candles, the "rule of two" applies. That is to say, a single candle may give a strong message, but one should always wait for confirmation from another candle before taking any trading action. However, it may not be necessary to wait an entire trading week for this confirmation.

In the historical chart of the S&P below, the last two candles appear to be hammers. The next to last one is what we call a "hammer-like" candle, since the lower shadow is not twice the height of the real body. The second one, however, is a true hammer, despite the very small shadow. Note how the first hammer-like candle was made outside the lower Bollinger Band, and that post candles were formed near support from the rising 40-week moving average. That suggests there is strong support at this moving average. 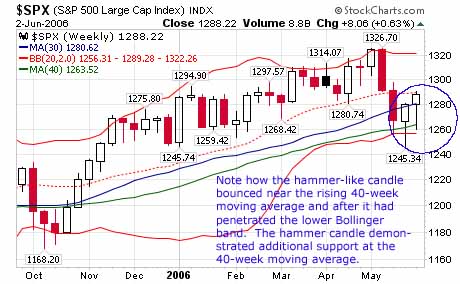 Why Does a Hammer Candlestick Matter?

Hammer candlesticks should be an integral part of all traders' visual identification skills. When combined with moving averages and indicators, these candles can warn of important trend reversals.

Ask an Expert about Hammer Candlestick

Principles of Technical Analysis: The Trend Is Your Friend
Is That Stock Price Too High? This Easy Tool Can Tell You
Where is the Bottom? Technical Analysis May Have the Answer
Start Swing Trading Today
How Swing Traders Harness the Power of Trendlines
Ask an Expert
All of our content is verified for accuracy by Paul Tracy and our team of certified financial experts. We pride ourselves on quality, research, and transparency, and we value your feedback. Below you'll find answers to some of the most common reader questions about Hammer Candlestick.

If you have a question about Hammer Candlestick, then please ask Paul.

If you have a question about Hammer Candlestick, then please ask Paul.

In the June 21 edition of "Principles of Technical Analysis", I described how to improve your trading from reading Japanese candlesticks. Read More ›

3 Facts You Must Know About Options

One of Johnny Carson's greatest characters was Carnac the Magnificent. Read More ›

When a person asks you, "How did the market do today?" it's safe to assume that he or she is looking for a quote on the most famous stock market metric in the world: the Dow Jones Industrial Average (DJIA). Read More ›

Traders find success along many paths, but most follow discretionary or systemic trading rules. Read More ›

Ask an Expert about Hammer Candlestick