Correlation, as used in investing, is a measure of the return performance of two (or more) securities or asset classes relative to each other. Portfolio managers, traders, brokers, and stock analysts use correlation to estimate the effectiveness of diversification to decrease risk and optimize portfolio performance in different market conditions.

Correlation is reflected by a statistic known as the correlation coefficient. This statistic conveys the strength and the direction of the relationship between two securities’ returns. It is a number between +1.0 and -1.0.

A correlation coefficient of zero indicates no relationship at all.

Portfolio managers may choose investments with positive correlations to magnify returns if markets goes in the direction they predict. For example, if the portfolio manager expects the US economy to grow in future months and years, they may decide to invest in US stocks and US real estate, which are often positively correlated. This move would offer the portfolio diversification, as one of those two investments may grow faster than the other, assuming the portfolio manager's prediction of positive growth for both assets is accurate.

By choosing a mix of investments with negative correlations, portfolio managers can afford to have losses in some of their investments because other investments are then expected to have gains. For example, if the economy is doing well and businesses are becoming more profitable, stocks in the portfolio may gain in value while gold falls a bit in value as it becomes relatively less desirable. On the other hand, if the economy is in recession and businesses are losing money, the value of stocks may fall while gold rises in value as investors have historically viewed the precious metal as a safe haven and a reliable store of value. 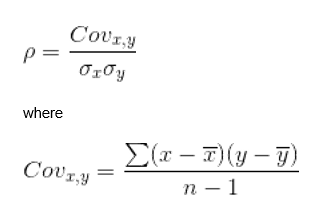 Simply put, we are taking the covarience divided by the securities' standard deviations to find our correlation coefficient between two investments.

Here we'll break down the formula to simplify. First we'll start with the symbol on the left (the greek letter rho), which is used to express the normalized covarience of the two securities' returns that you're comparing.

Now, on to the numerator of the formula on top -- the covariance. The covariance (which is expressed in more detail in the formula below "where") calculates how far and how often each security varies from its mean or average performance.

In the denominator of the formula on top (little sigma x multiplied by little sigma y) are the securities' standard deviations. .

Ask an Expert about Correlation

Never Pay Commissions On Stock Buys Again With This Investment Plan
How To Turn $30,000 Into $300 Million
One-Hit-Wonder Stocks You Wish You Could Forget
The Smart Way to Buy Foreign Stocks
Should I Invest in Small-Cap Stocks?
Ask an Expert
All of our content is verified for accuracy by Paul Tracy and our team of certified financial experts. We pride ourselves on quality, research, and transparency, and we value your feedback. Below you'll find answers to some of the most common reader questions about Correlation.

If you have a question about Correlation, then please ask Paul.

If you have a question about Correlation, then please ask Paul.

Ask an Expert about Correlation