Where is the Bottom? Technical Analysis May Have the Answer

A sharp plunge on Monday, a stunning rebound Tuesday, another pullback Wednesday. When will it all end?

It's increasingly clear that very low price-to-earnings ratios (P/E) aren't grounds enough to bring out value investors. Instead, most investors remain on the sidelines, trying to get a read on when the broader market will finally find a floor and start to rebound.

While biding their time, many of these folks are reading the charts, using technical analysis to project when and how the market downturn will finally end. Here are some of the tools they're using, and what those tools are saying right now. 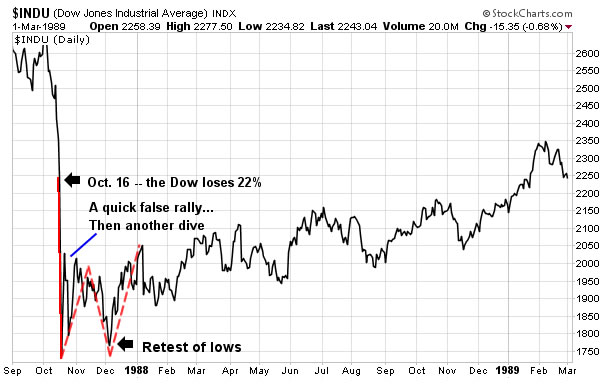 In that particular instance, the Dow put in another retest, falling back below 1,800 in early December. This would finally mark the bottom. A year later, the Dow had risen more than 15% from that final bottom, moving toward the 2,200 mark.

This current market action suggests we've got some more pain ahead of us. The Dow fell to 10,588 Tuesday (Aug. 9), before the stunning late day rebound. The market's subsequent pullback (to a 10,686 low and a 10,719 close on Wednesday), suggests we still need to revisit the 10,600 level at least once (if not twice). In theory, this is the level that should bring out deeper buying interest once again.

Because stock investors often have relatively longer-term timeframes with their holdings and options traders focus on short-term moves, technical analysts like to see how bullish and bearish these folks are by comparing the amount of interest in puts and calls.

The ISE Sentiment Index (also known as the ISE equity put/call ratio) is actually a contrarian indicator, which means high levels of put buying are actually bullish for stocks, and vice-versa. Why's that? Because extreme measures in one direction imply investors are already out on a limb and can only move back toward the middle.

The McClellan Oscillator is a tricky measure, which basically compares the moving average of advancing and declining stocks over 39 days and compares it to the same moving average over 19 days. (More specifically, it takes the net number of advancers or decliners and compares the figure to the broader measure of advances versus decliners over time.) The chart below reflects the strong rally late on Tuesday but not the subsequent pullback on Wednesday. 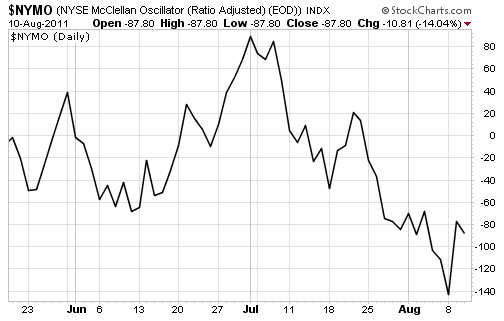 Whenever this indicator has fallen below -115, the market has typically posted a sharp snapback rally.

More than a century ago, Dow Jones founder Charles Dow came up with the Dow Theory, a notion that a simultaneous downward move in the Dow Jones Industrial Average (DJIA) and the Dow Jones Transportation Average (DJTA) confirms a market pullback will persist for an extended period. The first figure represents industrial production of goods (or at least did when the DJIA was first developed), while the second figure tracks the transportation of those goods.

Warning signs emerged a month ago when the Dow Transport index was rallying while the DJIA was weakening. Look for a sideways trading range for the Transport Index, which has fallen from 5,600 to 4,400 in the last month, before you can conclude that the broad-based selling is over.

The index actually fell to 4,334 on Tuesday afternoon as the Federal Reserve was weighing in on interest rates, and if that low gets breached (it's at 4,377 currently), then get ready for trouble.

Here's a sobering stat. Nearly 1,300 stocks hit 52-week lows on Monday. It's been almost three years since that last happened, and nobody wants to re-visit the absolute depths we saw in late 2008 and early 2009.

Why does this matter? Because it's a reflection of indiscriminate selling, which, in this modern era of computer-driven trading, can really feed on itself.

It's a hopeful sign that this metric is looking much better in the last few trading sessions. But if you see new lows on the New York Stock Exchange start to creep up in the next few sessions -- even as the broader indices seem to flatten, it's a sign the market's foundation is crumbling some more.

The Investing Answer: While the McClellan Oscillator implies that the worst of the storm has passed, it's more likely we have to retest those recent lows. We need not fall much further from here, but it's a bit too early to sound the "all clear."

If you have a question about Where is the Bottom? Technical Analysis May Have the Answer, then please ask Paul.

If you have a question about Where is the Bottom? Technical Analysis May Have the Answer, then please ask Paul.

Ask an Expert about Where is the Bottom? Technical Analysis May Have the Answer