The Single Best Investing Opportunity For The Next 50 Years

As an investor I do not make decisions based on "gut" feelings. To me, anyone who invests or "trades" in that manner is destined for poor results. If you're willing to invest on nothing more than a feeling, then I think you might as well flip a coin to make your investment decisions.

For me, investing is all about data. Roll up your shirtsleeves, do the hard work, study the data, and intelligent investing decisions will be the ultimate result.

It was looking at data that led me to what I believe is the single best investing opportunity for the next 20, 30 or 50 years.

And it all stems from the data in the chart below from Annenberg Learner, which depicts human population growth through history: 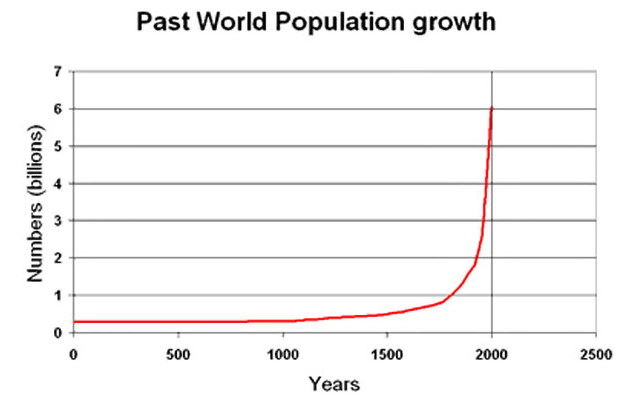 In short, it took millions of years for the world's population to reach 1 billion, but it took only 12 years for the last billion-person increase to our global population.

That's shocking. And if you don't find it shocking, you should look again.

This population growth is not slowing, and according to a recent United Nations report, in the next 40 years, the world's population is projected to increase by another 35%, from 7.1 billion people to roughly 9.6 billion.

Those are a lot of new mouths to feed, and feeding them is going to require a lot of food.

According to the head of the Australian national science agency, in order to feed all of these people, "in the next 50 years we will need to produce as much food as has been consumed over our entire human history".

This massive increase in the amount of food that will be required won't simply be caused by a population increase, but also from the fact that eating habits around the world are changing.

People in emerging economies are moving from a simple rice and plant-based diet to one more rich in meat and protein that requires a greater production of grains to feed livestock.

This move to a higher protein diet is one that can be expected to continue as people in emerging economies make more income and move toward a middle class lifestyle. A diet rich in proteins is not cheap, but it contains more nutrients, is more satisfying for hunger and provides more calories.

What all of this means is that the agricultural industry is going to be one with a strong wind at its back for a long time to come. Wind might be understating it: It could be more like a gale.

This is a clear opportunity to find the right companies and invest for the long term.

As legendary commodities bull Jim Rogers has said several times, all of those Wall Street "big shots" should be trading their fancy Maseratis in for tractors.

So Where Is The Profit Opportunity?

We have a future where more people, demanding more protein, will require a significant increase in agricultural production.

At the same time, the problem is that the amount of arable land is not going to increase.

An obvious conclusion to draw is that existing arable land is going to continue to become more valuable and the crops produced from it more expensive.

Therefore I believe it will be quite rewarding to own farmland and agricultural businesses in the coming years.

But how does one go about doing that without taking on a huge mortgage and buying cattle?

If you think that the continued growth in global population as well as the surging emerging world middle class will be bullish for commodity prices over the long term, then you should consider investing in agriculture-related funds like Market Vectors Agribusiness ETF (ticker symbol: MOO).

7 ETFs for Profiting From Commodities
The Best Stock To Profit From America's 'New Competitive Advantage'
Everything Beginners Need to Know About Commodity Investing
50 Surprising Facts You Never Knew About Oil
The Ultimate Guide to Profiting From the Commodity Super Cycle
Ask an Expert
All of our content is verified for accuracy by Paul Tracy and our team of certified financial experts. We pride ourselves on quality, research, and transparency, and we value your feedback. Below you'll find answers to some of the most common reader questions about The Single Best Investing Opportunity For The Next 50 Years.

If you have a question about The Single Best Investing Opportunity For The Next 50 Years, then please ask Paul.

If you have a question about The Single Best Investing Opportunity For The Next 50 Years, then please ask Paul.