Exchange-traded funds (ETFs) trade on the major stock exchanges with their own ticker symbols.

These funds, which first appeared roughly 20 years ago, allow you to target specific investment angles such as gold, energy, even foreign countries. Yet they do so without the active hand of a high-priced fund manager. Instead, ETFs are generally "passive," which means they own a select group of stocks (or bonds) and then hold them for a very long time. That means lower trading costs and very little management overhead, which adds up to much lower annual expenses.

For example, the Fidelity Advisor Large Cap B fund charges 2.04% in annual expenses. The fund owns a range of blue chip stocks such as Apple (Nasdaq: AAPL), JP Morgan (NYSE: JPM) and Chevron (NYSE: CVX). In contrast, the SPDR S&P 500 ETF (NYSE: SPY) owns a very similar basket of stocks and charges just 0.09% in annual expenses. In effect, that Fidelity fund would have to generate annual returns of at least 2% just to deliver the same net-of-fees result as the ETF.

ETFs had their first breakout year in 2008, when investors poured $169 billion into them. Most of the money went straight into ETFs that owned U.S. stocks. Fast-forward to 2012, and times have surely changed. ETFs received a record $191 billion last year, though the bulk of that money was earmarked for bond ETFs, international stocks and sector-focused funds. In fact, the amount of money tied up in ETFs now exceeds $1.35 trillion, more than double the amount seen at the end of 2008.

It should come as no surprise that Vanguard, which was known for very low expense loads in mutual funds, has sought to become a leading player in ETFs. Indeed Vanguard is now the industry's third-largest in terms of stock-and-bond ETF assets under management, well ahead of traditional retirement fund firms such as Fidelity and T. Rowe Price.

Barclays' group of iShares funds remains the top dog, with roughly 40% market share, while State Street Global Advisors, with its pioneering SPDRs program, controls roughly one-quarter of the market. In effect, Barclays, State Street and Vanguard now control more than 80% of this market. Smaller rivals such as Wisdom Tree, Van Eck, PIMCO and Invesco's PowerShares division continue to try to take market share from the bigger players in 2013 with offerings. 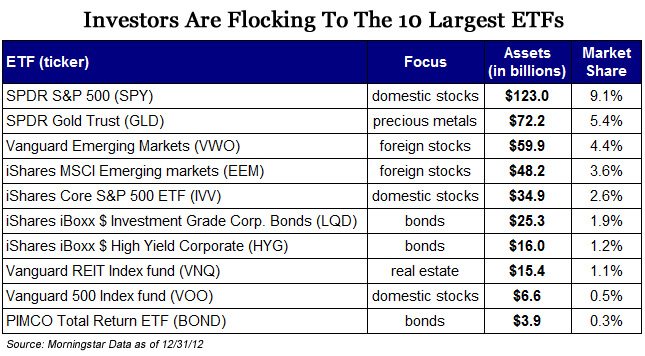 These funds are heavily traded, which means the gap between the price you would pay to buy them and the price you would receive when you sell them (known as the bid/ask spread) is narrow, usually just a penny. Conversely, there are now hundreds of smaller ETFs that don't see as much interest and as a result often sport wider bid/ask spreads that can eat into your profits. As a good rule of thumb, focus on ETFs that trade at least 100,000 shares daily.

The Investing Answer: As ETFs rise in popularity, the number of ETFs available has risen from 113 a decade ago to more than 1,200 today. The key is to identify the specific parts of the domestic or global economy you would like to target, then find out which ETFs are available to meet them. If you find multiple ETFs that appear to match an identical topic, then focus on the ETF that has the lowest expense ratio and the highest daily trading volume.

10 Must-Know Emerging Markets ETFs
7 ETFs for Profiting From Commodities
3 Ways You'd Never Think Of To Profit From ETFs
What To Own When the Dollar Collapses
The Boom in Global Infrastructure Spending
Ask an Expert
All of our content is verified for accuracy by Paul Tracy and our team of certified financial experts. We pride ourselves on quality, research, and transparency, and we value your feedback. Below you'll find answers to some of the most common reader questions about The Simple, Low-Cost Alternative To Mutual Funds.

If you have a question about The Simple, Low-Cost Alternative To Mutual Funds, then please ask Paul.

If you have a question about The Simple, Low-Cost Alternative To Mutual Funds, then please ask Paul.

Ask an Expert about The Simple, Low-Cost Alternative To Mutual Funds