As I was perusing my morning news feed, I came across an appalling amount of headlines about the ever-dreaded 'correction.' While there is value in some of these articles, the majority provide no unique insight.

Here's how one should think about a possible correction: How do I spot a correction? How do I protect against losing my shirt in a downturn? And how do I properly implement any suggested strategy?

First Question: How does one even know if a correction is coming?

The real answer: nobody really knows in which direction the market will go. Investors, companies and money managers alike merely hypothesize about the market's future, but most agree that timing these events is more a function of luck than accurate prediction.

In investing and psychology, we like clear guidance and definite action. So that poses a problem when a market pundit tells you 'I don’t know.' I'll go out on a limb and say it: I don't know where the S&P will be next month or in a year. I hypothesize that markets are a bit long in the tooth and there are some bearish fundamentals that could lead the market down.

In a December 2013 PBS interview, Robert Shiller, a Nobel laureate, Yale Economist, wasn't scared to say the same. In reference to the stock market, Shiller said, '...Yeah, it's time to be worried, but it's not necessarily time to bail out. I have money in the stock market.'

Shiller was basing this conjecture off of a metric he made popular, the cyclically adjusted price-to-earnings ratio, often referred to as CAPE or the Shiller P/E ratio. At the time of the interview, CAPE was around 25, currently it sits at 26.40, as of September 10, 2014.

CAPE's goal is to eliminate the cyclicality of price-to-earnings ratios by looking at 10 years of earnings data instead of just one. Business cycles can last a year or so, and if we're in a hyped up market for a year, then P/E ratios can be deceiving. The concept applies in depressed markets too. 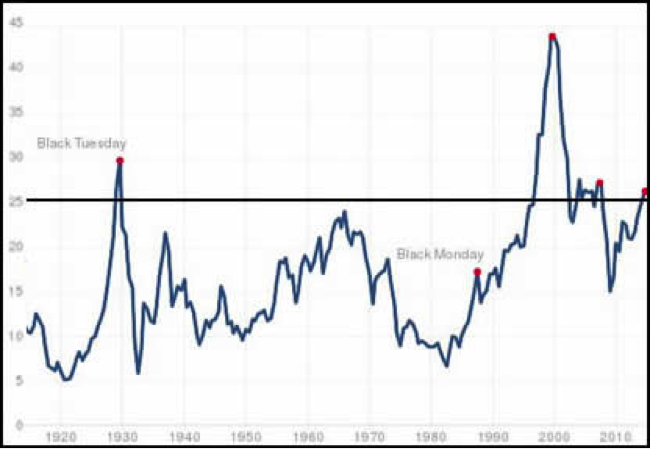 But that’s just one metric out of many -- albeit from a Nobel Prize-winning economist.

Second Question: How do I protect myself during a downturn?

Investing is personal and everyone has their own idea of which direction the market is heading. I, and likely Shiller, recognize that you don’t have to be a staunch bear or bull -- there is room for a middle ground.

Active portfolio managers get paid the big bucks to understand this concept all too well. It's called hedging -- a risk management strategy that allows you to be both long the stock market and short it at the same time. Hedging allows you to prepare for any potential positive or negative shocks to the market.

For those who aren't familiar with shorting stocks, the mechanics behind it are a little convoluted. In essence you're 'betting' that the price in a given security will decrease in value.

The one caveat with shorting, and a very misinterpreted principle from investing 101, is that your losses can be infinite.

This basic rule negates infinite losses: define your risk before entering any position -- long or short.

With a stop-loss rule in place the infinite losses problem can be put to bed.

Third Question: How I properly utilize a shorting strategy and stop-losses?

Fund managers hedge their portfolio by allocating a portion of their equity investments long and some short. The percentage of a portfolio that is long versus the portion that is short leads to a vital measure called net exposure.

Managing a portfolio's net exposure is meant to protect your portfolio in the event of a down move -- a form of hedging.

Let's look at an example. Say you're an investor with $100,000 in the S&P 500, but based off a number of factors, you're not incredibly confident that the market will keep marching higher. So you adjust your net exposure by allocating some of the $100,000 to a short ETF that happens to track the S&P perfectly.

Here's how minor changes in net exposure can protect you in the event of a 10% correction.

So by dialing back your net exposure from being strictly long the stock market, you have substantially cut your losses in the event of a 10% down move.

Not to say that markets are heading for a 10% correction, but this example highlights how you can protect your portfolio from a down move by lowering your net exposure.

One simple way an individual investor can lower net exposure is by incorporating short ETFs.

Whatever the makeup of your portfolio, there's likely a short ETF that could be utilized as a hedging component. From small to large cap, industry-specific or commodity-specific ETFs, there are enough products out there that you should be able to find one that is a good fit with your portfolio.

Risks to consider: As I mentioned above, shorting can be inherently higher risk if left unmanaged. To counter that risk, institute a stop loss in accordance with your risk tolerance.

Action To Take --> In the interest of prudently managing risk, try hedging your portfolio a bit using a short ETF. Even if you're just shifting from being 100% net long to 80%, it’s a step in the right direction. From there, watch how this simple hedging strategy affects overall portfolio performance. You'll likely notice less volatility day-to-day and better performance on down days.