Dividend Hikes or Stock Buybacks: Which Benefits You More?

For more than a year now, the financial press has been extolling the same statistic: All of the companies in the S&P 500 hold a collective $2 trillion in cash.

That's the result of businesses hoarding most of their earnings over the last few years. Given the tepid global economy, it's highly likely that this cash pile will keep on growing.

They didn't always stockpile cash. In the past, companies would look to spend their cash on acquisitions, as deal-making usually boosts top and bottom line results (i.e. revenues and profits). This is especially true during times of economic weakness -- like what we're currently experiencing.

Trouble is, corporate strategists are feeling uninspired these days, finding few potential deals that hold real appeal. In lieu of acquisitions, these companies are seeking two other ways to spend their cash: dividends and stock buybacks.

Yet as an investor, it's not clear which is the better move: Is it better to own a company about to issue dividends, or one that plans on buying back stock?

Let's take a look at the pros and cons of each scenario, starting with dividends.

The appeal of dividends lies in the production of income that investors receive. In a world of certificates of deposit (CDs) and government bonds that yield just 1% or 2%, dividend paying stocks that can pay a 3%, 5% or even 7% yield are highly-appreciated.

And many investors think that a robust dividend forces discipline on a company, making management focus on maintaining a steady cash flow that's returned to shareholders rather than using that cash for riskier moves -- like acquisitions -- that may not pay off.

The downside of dividends: double taxation. Unless you own the stock in a tax-favored retirement account, you'll pay the capital gains tax rate on those dividends (currently 15%, but possibly headed higher as part of a budget fix). That's after companies have already paid their share of taxes on profits (unless they are Real Estate Investment Trusts (REITs) of Master Limited Partnerships (MLPS) which allow for a “pass-through” of profits).

Scenario #2: The Company Buys Back its Own Stock

Because dividend payouts can trigger unwanted capital gains taxes for an investor, many prefer to see the company announce share buybacks. When a company buys back stock, it reduces the number of shares outstanding, which boosts earnings per share (earnings divided by shares outstanding).

Even though the amount of money Company ABC earned is still the same, the EPS more than doubled, just from reducing the number of shares outstanding.

As you can see, when companies buy back stock, it increases each share's value. Sometimes the increased share value attracts new investors, further driving up prices.

[You can read about the powerful impact that buybacks have on stocks in this column.]

Yet stock buybacks have one glaring flaw: Companies sometimes buy back their stock at the wrong time -- usually when they thought their share prices were undervalued.

Telecom equipment company Nokia (NYSE: NOK) surely regrets spending more than $2.5 billion in 2007 to acquire more than 100 million shares of its stock, only to find that its stock would go on to plunge in value. 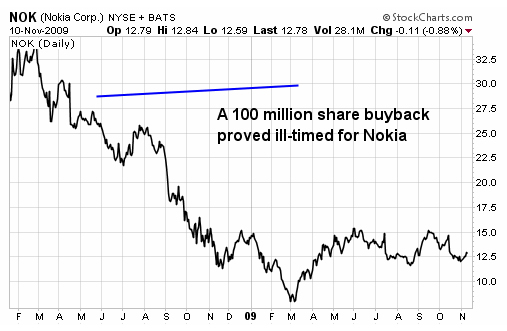 With its stock now trading at $6.60, that $2.5 billion buyback would have reduced the outstanding share count by 400 million at today's prices.

But there's another potential risk that shareholders should know about company buybacks: Many buybacks are really just covering up overly-generous stock option grants to employees and don't actually boost earnings per share (EPS).

Take acoustic engineering firm Dolby Corp. (NYSE: DLB) as an example. The company has been buying back stock for several years, yet due to numerous employee stock offerings, its share count keeps growing.

If there are more shares outstanding without an increase in EPS, this will cause the value of each share to drop. Lower share values could lead to a falling stock price, and leave shareholders worse off.

The company counters that its share count would have swelled far higher if the buybacks weren't enacted, but that may just be an excuse to keep shareholders calm.

The Investing Answer: As noted earlier, you should probably make your investment decisions based on what type of account the stock will be held in.

If you're invested in a company that has recently announced that it will begin issuing dividends, consider the tax consequences you may face. Right now, while capital gains tax rates are a reasonable 15%, it makes sense to own dividend-paying stocks in a traditional brokerage account, especially if you need the dividend income. If the tax rate on dividend income goes up in the coming years, as many suspect, then tax-sheltered retirement portfolios may be the better place for dividend-paying stocks to avoid the double-taxation factor.

If you're invested in a company that has recently announced that it will use its cash to buy back stock, pay attention to the outstanding share count of the company (found on the company's annual report on the company website). Companies focused on buybacks are suitable for taxable or retirement accounts, but you should be sure to monitor whether the share count is truly falling from quarter to quarter -- as this could affect the value of your shares in the company.

Also remember that just because a company says it will be buying back stock doesn't mean it will actually follow through with the plan -- only that the option is available.

$7,000 In Dividends From A $10,000 Investment
A Beginner's Guide to High-Income Investments
4 Reasons To Love Monthly Dividend Stocks
The Dividend Chart You Have To See
How Investing in DRIPs Can Grow You a Fortune
Ask an Expert
All of our content is verified for accuracy by Paul Tracy and our team of certified financial experts. We pride ourselves on quality, research, and transparency, and we value your feedback. Below you'll find answers to some of the most common reader questions about Dividend Hikes or Stock Buybacks: Which Benefits You More?.

If you have a question about Dividend Hikes or Stock Buybacks: Which Benefits You More?, then please ask Paul.

If you have a question about Dividend Hikes or Stock Buybacks: Which Benefits You More?, then please ask Paul.

Acorns Review: A Simple Way to Make the Most of Your Spare Change

Acorns is a way for beginner investors to get started with little money. The investing app allows investors to easily invest with small amounts of money through a painless and automated process. Read More ›

Ask an Expert about Dividend Hikes or Stock Buybacks: Which Benefits You More?