'Today's tight natural gas markets have been a long time in coming, and distant futures prices suggest that we are not apt to return to earlier periods of relative abundance and low prices anytime soon.'

At almost the same time Greenspan uttered those words, entrepreneurial independent oil and gas companies were already 'cracking the code' on the shale gas bonanza. Horizontal drilling combined with multi-stage fracturing started opening up vast quantities of shale gas in the United States and Canada.

By 2008, natural gas production had overwhelmed demand and American consumers have since enjoyed the world's lowest natural gas prices. 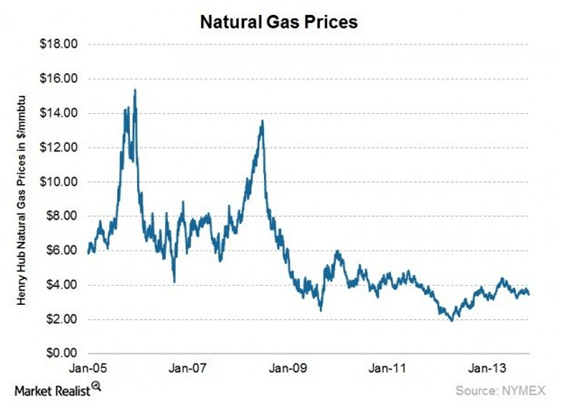 For years, we watched as United States manufacturing jobs disappeared and companies took operations to less expensive locations. Simply put, companies that stayed in the United States could not remain competitive because of the higher costs of doing business.

In Greenspan's defense, 10 years ago it seemed obvious that this trend would continue and that manufacturing in the United States had entered a permanent decline.

Cut to today... and a manufacturing rebirth is emerging in the United States. For the first time in generations, manufacturers are locating their next plants in America, and manufacturing data is already starting to show signs of increasing from 20-year lows.

What Is The Driver Of Manufacturing Rebirth?


Today, the United States is blessed with the unique combination of shale gas resources, pipeline infrastructure, trained energy industry personnel and land rights that will likely continue to provide the country with access to a reliable supply of cheap natural gas for years to come.

For example, over the past year natural gas prices in the United States hovered around $4 per MMBtu. Meanwhile, LNG (liquefied natural gas) being delivered to and purchased by Asian users is priced above $16 per MMBtu, and European consumers have also faced double-digit natural gas prices.

That means manufacturers using natural gas to run their plants in Asia are paying four-times as much as U.S. manufacturers for the exact same commodity... and Europe isn't much better off.


What's the Competitive Advantage for the United States?

This is a huge competitive advantage for the United States and an incredible change from what was expected a decade ago.

But again, we can't say that this disparity will last forever.

That is a very good thing for natural gas producers like Chesapeake Energy (NYSE: CHK), one of the shale gas pioneers.

So, even a small increase in natural gas prices would be a big benefit to Chesapeake and its investors.

Here's what put Chesapeake in this potentially very lucrative position...

In the early days of the shale gas revolution, then-CEO of Chesapeake, Aubrey McClendon, locked down as much shale gas (and liquids) acreage as the company could afford and then some.

At the same time, it established Chesapeake with a world class set of natural gas assets and provided the company with the huge leverage to any rebound in the price of the commodity it enjoys today.

Now with the lowest natural gas prices on the planet driving a manufacturing renaissance in the United States, simple supply and demand suggests that we're likely to see gas prices go up.

If that happens, Chesapeake could generate billions of dollars of cash flow to share with its investors.

That would be a win for America and a win for Chesapeake Energy shareholders.

Risks to consider: Chesapeake is basically a direct bet on natural gas prices. While the company is trying to move to a better balance between oil/liquids and natural gas, it is still the price of natural gas that matters most to its bottom line and its share price.

Action to take--> Buy shares of Chesapeake Energy (CHK) for the huge leverage to natural gas prices the company has. With natural gas demand growing in the United States, even small increases in this relatively clean fuel source could add billions of dollars to Chesapeake's books.