My clients didn't believe me when I said they could make an extra $10,000 a year, right away.

"Kate, we don't want to work harder. We're close to retirement," they told me. They also weren't interested in exploring esoteric tax loopholes.

"No, nothing like that," I assured them. "I'm talking about a very easy way to bring in the money that's yours -- and if you don't, the government will keep it!"

Well, that got their attention.

"The government is keeping money that belongs to us?" The wife looked panic stricken.

"Absolutely," I told her. "In fact, they do it all the time. Most Americans let the government keep money that belongs to them, and think nothing of it. In fact, they actively plan for that!"

My clients were absolutely stunned. This was a hard-working couple, both of whom had enjoyed successful careers, and were looking forward to an enjoyable and relaxing retirement. The idea of leaving money on the table -- especially when it meant giving it to the government -- was clearly out of the question.

I'm going to let you know the secret I shared with them, and how you can also use it to increase your income. This secret could help you avoid missing out on up to $250,000 that the government owes you. 74% of Americans leave this money on the table, so make sure it doesn't happen to you.

Before I get into that… let me show you why you can't afford not to pay attention.

You're Likely To Outlive Your Money

I can't tell you how many people come into my office, and say something like, "I don't expect to live long. My Dad died at 58." Then I dig a little deeper. I learn that dear old Dad was a smoker, and he toiled in a factory where workers had asbestos exposure.

So which data point are you going to choose?

One hundred! Assuming retirement at 66, that's 34 years without a paycheck from work. Do you have a plan for financing those years? Even if you think you would be the best greeter Wal-Mart has ever seen, you probably can't keep that job until you are 100.

Want to know the secret to getting the government to hand over money that is rightfully yours? This is just one secret the wealthy use to pad their retirements.

In short, Americans are eligible to start claiming benefits at age 62. Problem is, when you start taking Social Security at 62, you only get a fraction of what you fully deserve. Sadly, three-quarters of Americans make that mistake. If they waited until full retirement age -- which, for people born between 1943 and 1954 is 66 -- they would get 100% of their benefit.

And get this: For every year you wait, until age 70, the Social Security Administration pays you an additional 8%! Free money, just for waiting longer (as you can see in the following chart from retirement income consultant Financial Engines, which is run by Nobel prize winner William Sharpe). 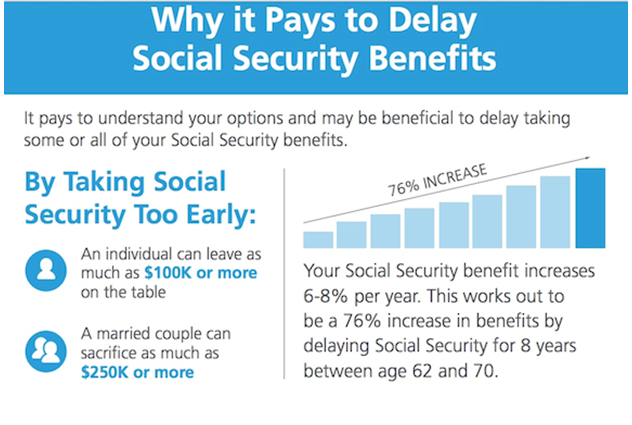 How is this possible?

Because 74% of Americans claim the benefit at 62, Uncle Sam has enough money to pay the more savvy people who wait!

For a couple, the benefits of waiting are even better (for this example, we'll assume the husband was the higher earner).

When the higher-earning spouse reaches his full retirement age, he applies for his Social Security benefit, but opts to suspend it. This means he won't claim a benefit right away, but it allows his wife to claim half of his.

Let's break that down some more, and you'll see what I mean.

Say Jim and Judy are married, and both are 66 years old, the full retirement age for people born between 1943 and 1954.

But Judy and Jim are smart. They have a strategy that will net an even greater benefit. And this isn't a loophole or some questionable tactic. It's simply knowing the rules and being savvy, to get money that is theirs in the first place.

Here's how they do it:

Doesn't it make sense to use the secrets of the rich, rather than taking the money at 62, just because it's there?

This strategy is called "file and suspend." It's a fairly common scenario, but you need to be aware that there are many other variations. For example, sometimes the lower-earning spouse should claim half of her spouse's benefit until she turns 70, at which time her own benefit becomes the greater amount to take.

But it's worth figuring out the optimal strategy, whether you use calculators or work with a financial planner. It's not just married couples who can use Social Security strategies; single, divorced and widowed people can also benefit from some forethought, rather than taking money at the first available opportunity.

It's not just theoretical. In my practice, I see examples of this all the time.

Here's one: A couple came to my office just a few weeks ago, after attending one of my seminars. They weren't sure what to do about Social Security, so I ran the analysis for them.

In addition to being uncertain about their ability to fund a long retirement -- they were both around 60 -- they were also covering expenses for the wife's 90-year-old mother. And they expected that those expenses would rise as the mother's health declined.

I ran a few different scenarios, using data from both the husband's and the wife's earnings for their entire careers, to date. When I showed the result to my clients, they were first astonished, and then delighted: I found them an additional $319,601 in Social Security benefits, well beyond what they thought was possible!

How much better would your retirement be with an extra $300K?

Risks to Consider: Many of my clients and seminar attendees report that Social Security clerks urge people to take benefits at 62, simply because the money is there. That doesn't take into account your unique circumstance, your other income streams, your longevity, or your lifetime income needs. Unfortunately, 77% of Americans believe they can turn to Social Security employees for advice about the timing of benefits.

My strong recommendation: Don't take advice from Social Security clerks! Not only are they uninformed about your situation, but they often don't know the rules themselves.

How a $180 Investment Turned Into $7 Million
2 'No-Brainer' Financial Risks You Should Take
Why Falling Gross Margins Don't Always Spell Trouble
20 Key Financial Ratios
The Shortcut To See How Much Your Portfolio REALLY Returned
Ask an Expert
All of our content is verified for accuracy by Paul Tracy and our team of certified financial experts. We pride ourselves on quality, research, and transparency, and we value your feedback. Below you'll find answers to some of the most common reader questions about Are You Making This $250,000 Mistake?.

If you have a question about Are You Making This $250,000 Mistake?, then please ask Paul.

If you have a question about Are You Making This $250,000 Mistake?, then please ask Paul.

How to Invest in Turnaround Stocks

I've been investing for 20 years, and for the first half of my investing career, I repeatedly made the same mistake.

Value Traps vs. Bargains -- How to Spot the Difference

The old adage “You get what you pay for” is one we've heard all our lives, probably since we were first introduced to money.

How To Fix Your 3 Biggest Financial Mistakes

Financial regrets? You've had a few, no doubt.

As an active trader, I look every morning at the market's top leaders and laggards in the hopes of spotting profitable opportunities.

As you may already know, the double top is a major bearish reversal pattern.