I'm going to show you a simple strategy that has never lost money in the market.

A recent study by mega-investment firm Oppenheimer proved just as much. Don't worry, it's not some "too good to be true" story. But there are some caveats.

First, I could tell 100 people about this strategy... and I'd guess 99 of them would flat ignore it. That's despite the evidence I'll show you backing it up.

"That strategy is for suckers."

"Its time has passed."

"You have to be an idiot to think that would work today."

I know some people will say this -- because they already have. We asked some of our regular readers to give us their thoughts on this strategy. And those were the type of responses I heard from some people. I was shocked.

Second, you can't use this strategy for every stock. Use it on the wrong ideas, and you can still lose money. But across the market as a whole, it hasn't failed once in the past 60 years.

The truth is, you don't have to trade every day... or every week... or even every year to beat the market. In fact, your success actually increases with the fewer trades you make and the longer you hold.

Of course, we all know you can't say the same for holding stocks for a year or two. When you hold stocks for a short period of time, your odds of losing money are much, much higher.

No wonder Warren Buffett has always said his favorite holding period is "forever."

But it's surprising how many investors still fight it. The average holding period for an investment was seven years in 1940, according to William Hutchings of the Financial News. By 2010, that period had shrunk to just six months.

So while all the evidence points to longer holding periods being better for your portfolio... most investors are doing the exact opposite. 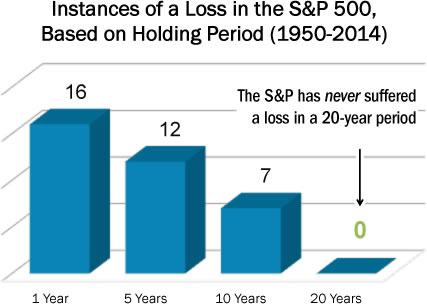 The trend is clear. The longer you hold an investment, the better your chances of making money.

But unfortunately, you can't just buy any stock, hold it forever, and expect to come out ahead. The market is littered with Enrons, WorldComs, even General Motors. Holding forever didn't matter a lick with them.

What you have to do is find a handful of companies that enjoy huge (and lasting) advantages over the competition... companies that pay their investors each and every year by dishing out fat dividends... and companies buying back massive amounts of their own stock.

These are the kinds of companies that can make you money no matter what. Once you find them, the strategy is simple -- just buy their shares and hold "Forever."

My research team and I have done a ton of research on the impact of holding stocks Forever. Here are a few success stories we've heard from investors like you:

Today he's been retired about 27 years, is a member of two private country clubs, and has homes in both Florida and Massachusetts.

With that as an inspiration, my Top 10 Stocks research staff and I created a list of the "10 Best Stocks to Hold Forever" back in July 2011.

Since then, our original list of Forever Stocks have been an investor's dream. They've beaten the market by as much as 85 percentage points, increased their dividends up to 633%, and in some cases, have done so with less volatility than the market.

Because of the success of these stocks, we've done something new for this year. We've built upon our original research by adding three additional criteria to find the absolute best stocks out there. The result is a brand-new, never-before-seen list of 10 Forever Stocks that have gained an average of 829% -- beating the market by more than a 7-to-1 margin over the past decade.

I recently gave investors a sneak peak of this breakthrough research at St. Edward's University. You too can learn more about what we've uncovered -- including some names and ticker symbols -- by watching the filmed version of my live presentation here.

Lessons from "The Witch from Wall Street"
Shield Your Hard-Earned Money from Uncle Sam With a Trust
Don't Be Misled By the P/E Ratio
The Greatest Mathematical Discovery of All Time
How to Use Margin Analysis as an Investment Tool
Ask an Expert
All of our content is verified for accuracy by Paul Tracy and our team of certified financial experts. We pride ourselves on quality, research, and transparency, and we value your feedback. Below you'll find answers to some of the most common reader questions about The Simple Strategy That's Never Lost Money.

If you have a question about The Simple Strategy That's Never Lost Money, then please ask Paul.

If you have a question about The Simple Strategy That's Never Lost Money, then please ask Paul.

M1 Finance is an investing app that offers a simple and low cost way to build an investment portfolio. Read More ›