Gold, of all the precious metals, is the most popular among investors and traders. Gold and its derivatives are widely traded in the markets for many reasons. As a store of value, gold is a hedge against economic, social and political unrest. But as a commodity, gold is subject to the fundamentals of supply and demand.

A number of people have asked me if I follow gold. I did follow gold at one time and I still own a small amount. However, I eventually ran into irrational speculation that made trading in gold more difficult. Without considering underlying fundamentals or any developing technical trends, these undisciplined traders would chaotically drive the price in one direction, then another.

With so many people showing interest in gold today, it is time to reexamine whether trading conditions are more favorable and warrant adding gold to the opportunity list. In today's article, we'll examine the factors affecting gold's supply and demand equation. In the two articles that follow, I'll look at other factors that drive the price of gold and how we might consider gold as part of our investing strategy.

Factors Affecting the Price of Gold
Like all commodities, the price of gold depends on supply, demand and short term trading by speculators.  Unlike other commodities, gold holds a special place in the minds of many investors. Although gold has some industrial uses and is cherished for jewelry, gold is primarily a monetary metal, and has been throughout human history. It's old-school money: rare, portable and concealable.

Supply and Demand
A total of 165,000 tonnes of gold, roughly equivalent to 5.3 billion troy ounces, have been mined from the beginning of human history to 2009. In the chart below from the World Gold Council, the 5-year average demand through 2008 was 3,599 tonnes and the average supply was 3,672 tonnes. This meant supply was slowly expanding each year, placing downward pressure on the price. 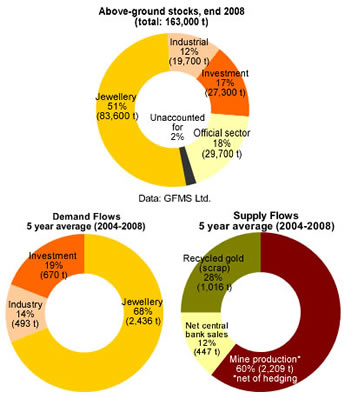 There are gold mines on every continent except Antarctica. Mine production of gold remains stable at approximately 2,485 tonnes per year. As old mines play out, new mines begin production, helping to keep the amount of mined gold relatively consistent.

Recycled gold from scrap is an area not many investors consider as a supply of gold. Yet it accounts for a large and important source of gold each year. When prices are high enough, individuals and companies are encouraged to scavenge it from wherever possible. It's then available for sale to new investors.

Gold is held by central banks and international monetary organizations, which hold about 20% of the above ground stock of gold as reserves. While there are some exceptions, central governments have been net sellers between 2004 and 2008. In 2008, central banks sold 248 tonnes of gold, and though they have not yet had a major effect on the supply, they are suppliers nonetheless.

Who Wants Gold?
55% of demand is attributable to just five countries -- India, Italy, Turkey, America and China -- and each market is driven by a different set of socio-economic and cultural factors. India is the world's largest consumer of gold, as Indians buy about 25%, or 800 tonnes, of the world's gold every year.

When consumers feel confident in their economy, they buy gold jewelry. But as history has shown, during periods of economic stress consumers reduce their purchase of gold jewelry (and sometimes sell the gold jewelry they already own), preferring to conserve their cash. The long-term demand for gold jewelry is looking up, since the growing middle class in China and India will almost inevitably buy more gold jewelry.

Due to its special chemical properties, gold is a valued industrial metal. Engineers and chemists are constantly finding new uses for gold that add to its demand; however, industrial use remains relatively minor and it should not materially affect the overall demand equation.

The fastest growing source of demand during the last five years has been from investors. Exchange traded funds (ETFs) that invest in gold bullion have become so popular that they are the sixth-largest owner of gold in the world, just behind the central bank of France. The U.S. government, the nation's largest seller of gold, sold 615,500 ounces of gold bullion coins to investors in 2010.

If the demand for gold as an investment continues to expand, we could eventually see demand outstrip supply. On the other hand, if demand for investment were to fall, the supply of gold sitting in the ETF vaults would be unloaded, driving the price down as the funds flood the market with their holdings.

With supply and demand of gold in relative balance at the present (3,599 tonnes of demand and 3,672 tonnes of supply in 2008, as noted earlier), you would not expect the price to react significantly one way or the other. If gold jewelry becomes more popular over the next 10 to 20 years, we should see an increase in the demand for gold, and therefore, an increase in gold's price. However, the price of gold has already soared to $1,257, up from $940 just 12 months ago. This indicates that other factors are driving the price.

Later this week, I will address the "other factors" that drive the price of gold. Then I will cover how we might use gold as one of the tools for investing.

P.S. If you're in the mood for another gold related article, check out one of InvestingAnswers' most popular articles of all time: 50 Surprising Facts You Never Knew About Gold.

4 Flaws to Consider Before Investing in ETFs

Save $400 on Your Electric Bill Right Now

The Key to Building a Strong Portfolio