Fifty years after Yugoslavian President Josip Tito founded the Non-Aligned Movement, the economies of the association's roughly 120 nations have grown in excess of 5% per year on average, while larger developed economies in North America, Europe and Japan have slowed to a crawl. Yet, it's easy to forget the investing potential of these emerging markets, spread throughout Asia, Africa and Latin America.

When investors have sought to gain exposure to less developed economies, they've largely focused on Brazil, Russia, India and China, mostly ignoring the dynamic growth that has been taking place beyond the "global top 20." But you need not venture halfway around the world to profit from the robust growth among the non-aligned nations. Instead, just look south of the border.

In Mexico, for example, the economy grew roughly 5% in 2010 and 4% in 2011, which was twice as fast as the U.S. economy -- its top trading partner. As a result, the Mexican stock market has been on a tear, as this five-year chart of the iShares MSCI Mexico Investable Market Index shows. 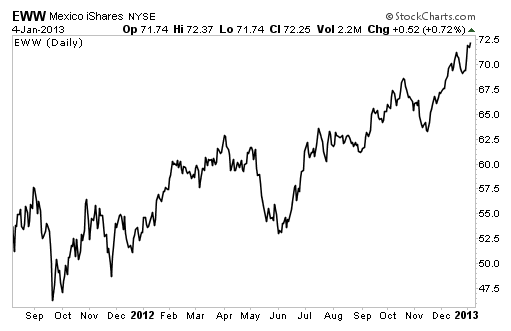 One trait is fueling growth in Mexico and all across Latin America: rising middle classes. As citizens earn more, they begin to spend more in restaurants, at department stores, on travel and on entertainment. And that spruces up demand for a range of new businesses that cater to consumer appetites. Glance at GDP per capita, which is the size of a respective economy divided by its population size.

These economies may not seem impressive when it comes to absolute GDP per capita (for the sake of comparison, U.S. GDP per capita is $47,000), but it's the incremental changes that are notable. With each passing year, there is another $500 or $1,000 to spend on leisure, education and other pursuits. The fact that these economies have been steadily expanding while their larger trading partners in North America and Europe and have been weak makes this all the more impressive. When the United States and European economies finally start to grow again, Latin American growth rates may rise even higher as international trade expands.

The Big Three (besides Argentina)

Although Argentina has the most robust economy in South America (on a GDP per capita basis), it's not a fertile area for investors. That's because the Argentinean government has repeatedly antagonized the investment community with sudden decrees regarding nationalization of key industries (such as energy producer YPF) or onerous tax rates on exporters. That's why it's wisest to focus on three other dynamic Latin American economies that have more investor-friendly business policies.

Back in 2011, I took note of the robust growth in Brazil, explaining that it is likely to host the fourth-biggest economy in the world by 2035. That view still holds, and the Market Vectors Brazil Small-Cap ETF (NYSE:BRF) remains one of the best ways to play Brazil's market.

Yet investors shouldn't overlook Chile and Colombia. Each country can boast of rising middle classes, though Chile is farther along on the path of economic development, as measured by GDP per capita statistics. Chile's economy is home to the region's most sophisticated banking system, has thriving tourism and agriculture sectors and is one of the world's top producers of metals such as copper and iron ore.

Related: The Surprising Formula Every International Investor Must Know

Even as Chile's economy has advanced over the past three years, Chilean stocks have moved sideways, lagging U.S. stocks in the process. Blame it on the outsized impact of commodity prices, which have been range-bound in recent quarters (which means the commodities are neither trending up nor trending down). Still, the iShares MSCI Chile Investable Market Index ETF (NYSE:ECH) holds great appeal for investors looking to capture the growth of Latin American economies.

The prospects for the Colombian economy are even brighter. That country has emerged from a long and brutal drug war that took a terrible toll on the economy as middle-class citizens fled to the United States or elsewhere to escape the violence. You can see the economy already coming back to life: It grew 5.9% in 2011, according to the CIA World Factbook, and likely grew around 5% in 2012. Major cities such as Bogota and Medellin are humming with the construction of corporate skyscrapers, and exports of oil, coffee, natural gas and other commodities are steadily rising.

The Global X FTSE Colombia 20 ETF (NYSE:GXG) has become a favorite investment platform for U.S. investors seeking exposure to Colombia. According to Morningstar.com, this fund has generated a score of five (out of five) in terms of returns, yet carries a very low risk rating compared to its peers.

The Investing Answer: Latin American stocks surely will stumble anew. That's the nature of emerging market economies. Yet all of the key ingredients are in place for solid long-term growth. If you invest in these countries, view them as long-term holdings -- they are likely to post wild price swings from quarter to quarter.

Tips on How to Analyze an Acquisition Announcement
10 States With Ridiculously High Car Insurance Rates
8 Signs You're Investing Like Buffett
10 Countries Drowning In Government Debt
Learn the Top Causes of Bankruptcy and How to Avoid Them
Ask an Expert
All of our content is verified for accuracy by Paul Tracy and our team of certified financial experts. We pride ourselves on quality, research, and transparency, and we value your feedback. Below you'll find answers to some of the most common reader questions about These Emerging Hot Spots for Global Investing Are Closer Than You Think.

If you have a question about These Emerging Hot Spots for Global Investing Are Closer Than You Think, then please ask Paul.

If you have a question about These Emerging Hot Spots for Global Investing Are Closer Than You Think, then please ask Paul.