Revealed: The Secret Of The 'Hidden' High-Yielders

Call it "The Mystery of the Secret Payout."

When I was young, Frank and Joe Hardy -- the Hardy Boys -- were my heroes.

There was no shortage of bad guys in Bayport on Barmet Bay. That's where the fictional teenage brothers and amateur detectives cracked cases involving all manner of miscreant behavior, from murder to auto theft to the ever-popular diamond smuggling.

Their adventures had titles such as "The Sinister Signpost," "The Secret of Skull Mountain" and "The Crisscross Shadow." What all-American adolescent reader could resist? The original Hardy Boys mystery stories consisted of 58 books published between 1927 and 1979. I lived vicariously through many of them.

But when it comes to dividend sleuthing, The Daily Paycheck's Amy Calistri is hard to top.

Consider a recent installment of Amy's, "These Above-Average Yields are Hiding in Plain Sight." StreetAuthority researcher Austin Hatley introduced you to the topic earlier this month, but it's a tale worth retelling.

Remember the Baker Street Irregulars? They were the band of urchins upon whom Sherlock Holmes relied for tips.

"Holmes recognized that these children of the street were often ignored by the general public," Amy wrote. "They could follow people and ferret out information unnoticed."

As with the Baker Street gang, Amy's Wall Street Irregulars fly under the radar, largely ignored by the public.

Some Wall Street Irregulars are of the quarterly variety, some are semi-annual. Either way, the case breaker is that at least one dividend payment per year is significant -- a factor that can distort how a company's effective payout is reported in the media and elsewhere. And that's where Amy's detective work comes into play.

Most brokerage and investment websites take a stock's most recent dividend payment and multiply it times the payment frequency to get a stock's annual dividend. These websites then use the computed annual dividend to calculate the yield. For the Wall Street Irregulars, the yield investors see often underestimates the true annual yield of the stock.

Case in point: RLI Corp. (NYSE: RLI). RLI is a $2 billion specialty insurer based in Peoria, Ill. The company has been profitable 31 of the past 35 years, including the past 17 consecutive years.

RLI has paid a dividend for 149 consecutive quarters. And, just as important from Amy's perspective, the company has a good track record of hiking those dividends (up 36% over the past five years). Last May, for instance, RLI raised its quarterly payout to $0.34 per share, from $0.32 three months earlier, marking the 38th consecutive annual dividend increase.

And if you check popular financial websites such as Yahoo Finance, you'll see the dividend reported as $1.36 annually ($0.34 times four), for a yield of about 1.5% at current levels.

Only one problem: The "Div & Yield" information that's reported by most of the financial media, including Yahoo, is not correct.

You see, what the computers at Yahoo and other financial services often fail to take into account is the irregular dividend. RLI, for example, has been paying an irregular dividend in the fourth quarter for the past three years.

Last year's irregular dividend was $5.32 per share, up from $5.30 the previous year. There is no guarantee that RLI will pay a special dividend again this year, but if it does follow suit, the annual dividend could amount to $6.34 per share, for a yield of about 6.8% at current prices. 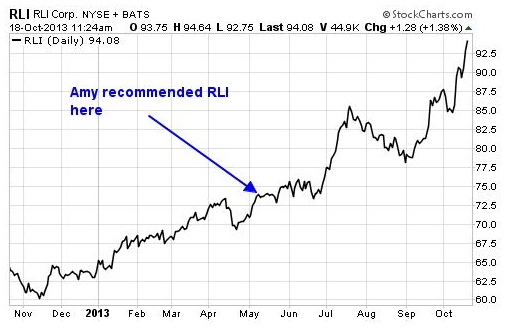 Amy alerted her Daily Paycheck subscribers to RLI's "hidden yield" back in May, before adding it to her model portfolio. Since then, the position has returned about 25%. As recently as today, in fact, the stock posted an all-time high of $94.64 per share.

In The Daily Paycheck, Amy provides investment ideas that offer above-average dividend yields and frequent, dependable distributions. The goal is to build a portfolio that over time will deliver a steady stream of dividend payments, or "paychecks," on top of better-than-average capital gains.

Here's more from Amy on RLI and the strategy behind The Daily Paycheck...

Bob: What brought RLI to your attention earlier this year?

Amy: I was specifically looking for an insurance company because they tend to do better when interest rates are high. At the end of 2012 I had identified a number of "irregulars" whose indicated yields were erroneously low. RLI was one of them, and I put it on my watch list.

This past spring, the Federal Reserve seemed poised to let long-term interest rates finally rise off their historical lows. But even though the Fed has delayed its policy change, RLI has done an excellent job growing its insurance revenues.

Even though the stock has had a nice run, I still think RLI will do well for foreseeable future. For one thing, if the company declares its special dividend -- which usually happens in November -- the announcement will attract a lot of investor attention. And if the Fed shifts its interest rate policy sometime next year, it will be another tailwind for insurance companies like RLI.

Bob: What are some of the things you look for when you're sleuthing for dividend investments?

Amy: I never just look at an investment's indicated yield. I crawl through its dividend track record. In general, I look for a company or fund that has a history of paying a stable or growing dividend. For instance, as you already noted, RLI has raised its normal quarterly dividend every year for the past 38 years. That's a nice track record.

I also keep an eye out for companies that make a sizable increase to their dividends. To me, that's a signal that a company's business model has materially improved. For instance, the media company Gannett (NYSE: GCI) raised its quarterly dividend to $0.20 per share, up from $0.08, in March 2012. Although some people still viewed the firm as little more than a newspaper company in decline, GCI had been successfully growing its newer media businesses. I profiled Gannett in April 2012. Since then my subscribers and I have a total return of 100%. GCI is another company that I think should continue to do well in the foreseeable future.

Bob: Obviously there's been a lot of uncertainty in the market recently, and there's undoubtedly more to come. What do you have to do in your Daily Paycheck portfolio to mitigate the risk?

Amy: In The Daily Paycheck, I use the dividends to buy more shares. One of the luxuries of managing a dividend-reinvestment portfolio is that it is very forgiving during periods of volatility. Overall, my portfolio is roughly 40% less volatile than the overall market. So I really didn't have to do anything during the turmoil.

On average, I receive 30 dividends a month. So even when the market dips, I have money coming into the portfolio. On down days, my dividends get reinvested at lower prices and higher yields, which actually helps my portfolio over the long haul.

The only material changes to my portfolio I've been making relate to the possible increase in long-term interest rates. This year, I've been taking profits in high-duration bonds and bond funds. They will be the most negatively impacted by rising rates. I've been putting that money back to work in securities that tend to do well in a higher interest rate environment.

Bob: Are you staying away from bonds?

Amy: No, not entirely. Bonds are nice holdings because of their steady payouts. And with dividend reinvestment, you can get some nice compound growth. But the price of fixed-income bonds with long maturities and/or low yields can drop a lot when interest rates rise. After all, who wants an existing corporate bond with a 3% yield if the 10-year Treasury starts yielding 4%? The prices of bonds with higher yields and shorter maturities, however, tend to be more stable. Their prices are less interest rate-sensitive. So I continue to hold some short-maturity bond funds. The PIMCO 0-5 Year High Yield Corporate Bond ETF (NYSE: HYS) is a fund I continue to hold in my portfolio.

$7,000 In Dividends From A $10,000 Investment
How to Create a Stream of Lasting Dividend Income
Too Many Dividend Investors Are Ignoring This Problem...
The Dividend Chart You Have To See
Dividend Coverages, Payout Ratios, and Dividend Yields
Ask an Expert
All of our content is verified for accuracy by Paul Tracy and our team of certified financial experts. We pride ourselves on quality, research, and transparency, and we value your feedback. Below you'll find answers to some of the most common reader questions about Revealed: The Secret Of The 'Hidden' High-Yielders.

If you have a question about Revealed: The Secret Of The 'Hidden' High-Yielders, then please ask Paul.

If you have a question about Revealed: The Secret Of The 'Hidden' High-Yielders, then please ask Paul.

Ask an Expert about Revealed: The Secret Of The 'Hidden' High-Yielders