When assessing investments, it’s wise to look at several factors. And only one investment category can check all the below "boxes." You should be asking:

Are these investments capable of generating steady and predictable returns?

Do they have solid growth prospects?

Are they likely to hold up well in a difficult stock market environment, or a slumping economy?

Do they mesh well with broader tax-savvy investment goals?

What investment category can answer "yes" to the above? Oil-and-gas focused Master Limited Partnerships (MLPs).  Not surprisingly, this investment type is growing in popularity with many investors.

Though companies can elect to become an MLP in almost any industry, they have become inextricably intertwined with the energy transmission industry. Almost all domestic firms that ship oil, natural gas and other products through thousands of miles of pipelines are set up as MLPs, for fairly obvious reasons.

You may be familiar with their tax benefits, but they hold great appeal for other reasons as well.

1. A Massive And Growing Industry

We’re now five years into what many are calling “an energy revolution.”  Back in 2008, many companies began to deploy a series of technologies that could help tap into previously inaccessible pools of oil and gas that lay buried deep beneath the earth’s surface.  Fast forward to 2012, and our nation’s energy output has risen sharply, as this report by the Energy Information Administration (EIA) notes.

And increasing production is expected to continue, which is why some economists think our nation will be energy-independent by 2017. After that, our nation may even become a net exporter of oil and gas.

To keep up with the steady growth, a number of leading MLPs have been laying down new pipelines at a rapid pace. From the Upper Midwest to the coast of Louisiana, and from the plains of Oklahoma to the northern reaches of New England, energy pipelines now cross the land.

And that growth opportunity has helped deliver steady upside for investors. For example, Kinder Morgan Energy L.P. (NYSE:  KMP), the nation’s largest MLP, has seen its shares rise more than 300% over the past 10 years. 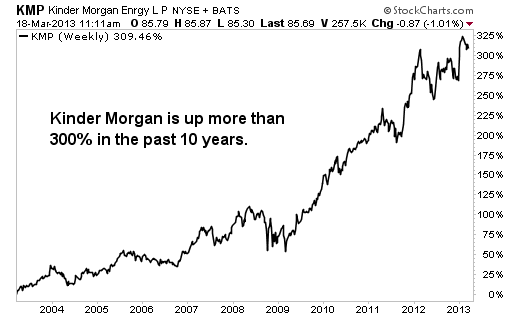 The charm of these MLPs is their rain-or-shine business models. They don’t feel any impact when oil and gas prices rise or fall, as they are really focused on the volumes they transmit. And since our nation needs fuel to operate, regardless of the economy’s growth rate, these firms aren’t subject to big slumps in their sales and profits when the economy cools.

To be sure, these MLPs won’t deliver the robust upside that investors expect from traditional growth stocks. They are built to deliver steady and growing dividends, which means they hold much greater appeal to the income-seeking crowd.

And income-oriented investors have surely taken note of these MLPs. While most government bonds and bills pay less than 2%, and most banking instruments such as CDs yield less than 1%, many MLPs sport dividend yields in the 5% to 7% range. Considering inflation and interest rates are expected to stay low for the foreseeable future, these MLPs should continue to find favor in many portfolios.

What would happen if interest rates rose sharply, and investors could start to earn 7% or 8% from government bonds and banks’ CDs? Well, if and when that happens, these MLPs would likely see their share prices fall as they start to offer comparatively lower yields.

The good news: The dividend payments wouldn’t be impacted, so investors would still be able to count on robust payouts, even when inflation and interest rates sharply impacted dividend producers in more economically sensitive industries.

As mentioned earlier, one of the greatest virtues of MLPs can be seen in their tax-efficient structure. Unlike most corporations, MLPs pay no taxes (as long as they pass on at least 90% of their cash flow to investors in the form of dividends). You’ll still have to pay taxes at the personal level on your tax returns, but the dreaded “double taxation” that vexes most investments simply doesn’t apply here.

The Investing Answer: It bears repeating that MLPs should be seen as steady income producers, and not as growth stocks. They are capable of some growth, as they build out more pipeline capacity, but will eventually reach maturity as our nation’s heady investment in oil and gas pipelines move closer to completion. Yet even then, these MLPs can provide solid cash flows -- and very impressive dividend yields.

How to Calibrate Your Asset Allocation & Reach Your Financial Goals
Investing Basics for the New Investor
Economics for Investors: The Basics
Dividend Coverages, Payout Ratios, and Dividend Yields
Should You Still Contribute To An Underperforming 401(k)?
Ask an Expert
All of our content is verified for accuracy by Paul Tracy and our team of certified financial experts. We pride ourselves on quality, research, and transparency, and we value your feedback. Below you'll find answers to some of the most common reader questions about 4 Reasons Why Smart Investors Love MLPs.

If you have a question about 4 Reasons Why Smart Investors Love MLPs, then please ask Paul.

If you have a question about 4 Reasons Why Smart Investors Love MLPs, then please ask Paul.

Ask an Expert about 4 Reasons Why Smart Investors Love MLPs