If you ask most people, they will say there are two types of people that put money in the stock market.

There are "investors" -- those who put money to work in fundamentally sound companies for the long term. Then there are "traders" -- those who buy stocks for a short-term gain, without much concern for the actual business.

The reality isn't as clear-cut. You see, if you aren't using the principles of both investing and trading, then I think you're limiting your returns and increasing your losses.

But it's one thing to tell you this. I want to prove it to you with one of the most widely followed stocks of the past decade -- Apple (Nasdaq: AAPL).

You're no doubt familiar with Apple. You might have even owned some shares at some point. Maybe you still do.

Apple is one of the most fundamentally sound companies on the planet. For years, the popularity of iPods, iPhones, and its computers caused earnings and cash flow to soar. Since 2003, the company's annual revenue has risen from $6.2 billion to $170.9 billion.

Meanwhile, until very recently, Apple carried no debt. Instead, it boasts a $145 billion cash pile. That's enough cash to pay every man, woman, and child in the United States $460.

And if you were an investor focused only on Apple's fundamentals -- a strong company with a pristine balance sheet that saw earnings soar -- you made a fortune. From 2003 until its peak in 2012, Apple's stock returned more than 9,661%.

If you focused just on fundamentals, however, the joy of owning Apple ended in September 2012. Back then, the stock hit an all-time high near $705 per share. Sure, the company was still making money hand over fist and was among the strongest firms on the planet. That didn't matter. Neither did the fact that Apple initiated a dividend to return billions of dollars annually to its investors.

But if you used a few simple trading signals, you could have avoided that drop altogether.

To be more specific, I am talking about "relative strength."

If you've never heard of relative strength, don't worry. It's simple to understand.

Relative strength is found by calculating the percentage price change over the past six months for every stock and ETF. You then sort these changes from high to low and assign the highest value a relative strength rank of 100 and the lowest value a rank of 0.

Every stock is assigned a rank based on where it fits into that range. I like to use 70 as the limit for buys and sells. If relative strength is greater than 70 (meaning a stock is rising more than 70% of the market), the stock or ETF is a buy. I sell whenever the rank falls below 70.

You can see Apple's relative strength charted below its price in this graphic: 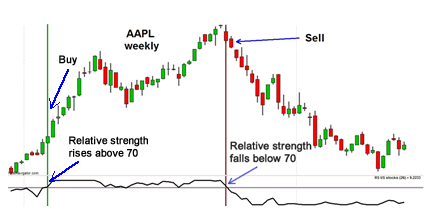 In this case, Apple's relative strength fell below 70 back in 2012 (when the shares were still above $650), meaning it was time to sell. The result? A crystal clear signal that investors should get out.

That one signal could have saved an investor from losing thousands of dollars. What's more, this signal got them out of an underperforming stock during one of the best market rallies we've ever seen -- allowing them to put money to work elsewhere.

It's proof that if you aren't using trading signals in your investing, then you're missing one of the most important tools to beat the market.

Now, I will be the first to tell you that one example doesn't prove a system works.

That's why I want to tell you about a unique research project I've completed that puts this tool to the test.

The Maximum Profit system uses a few simple trading signals (like relative strength) and applies them to the stocks that are currently held within the various StreetAuthority portfolios. These are the same stocks held by Nathan Slaughter, Amy Calistri, Andy Obermueller, and other StreetAuthority experts... and that you may already own.

From there, I rank every single holding, top to bottom, filling a portfolio with up to 10 stocks that rate the highest. The results are very encouraging. During a 10-year backtest from 2003 to 2013, my system showed a gain of 21.5% per year versus a roughly 7% annual rise in the S&P.

To learn more about this research, I encourage you to read this special report. You don't want to miss this opportunity.

Inside the Numbers: Stocks That Went Up When the Market Went Down
The Secret Ratio That Predicts Winning Stocks Time And Again
Trading in Congress: The Most Popular Stocks Owned by Congress
Should I Invest in Small-Cap Stocks?
The Lowdown on Penny Stocks
Ask an Expert
All of our content is verified for accuracy by Paul Tracy and our team of certified financial experts. We pride ourselves on quality, research, and transparency, and we value your feedback. Below you'll find answers to some of the most common reader questions about This System Accurately Predicted Apple's Crash.

If you have a question about This System Accurately Predicted Apple's Crash, then please ask Paul.

If you have a question about This System Accurately Predicted Apple's Crash, then please ask Paul.

Ask an Expert about This System Accurately Predicted Apple's Crash