The First $1 Trillion Boomtown That Almost Nobody Knows About

It's funny where money is made sometimes.

I have a friend who decided a decade ago to buy a bankrupt motel in the middle of the swamp in northern Alberta. Most of the passers-by here were forestry workers, dropouts looking for a place to disappear, or migratory birds.

At the time, it seemed crazy.

I saw the same friend a few years after the purchase. The hotel, he told me, was booked solid for the next five years -- upward of 300 rooms at $250 per night.

The modest investment paid him millions over the course of the next several months.

This incredible turnaround was spurred by some big changes in the area that were driven by natural resources development.

My friend bought the hotel just as the oil industry in that part of the world was on the cusp of commercializing vast deposits of unconventional petroleum lying just below the swamps. Those billion-barrel fields would quickly become such a big story in the petroleum business that the formerly unknown town became a household name on the tongues of politicians, industrialists, and investors globally.

That place was Fort McMurray -- ground zero for the development of the Canadian oil sands.

The accelerating development of the oil sands over the past decade created a nearly unparalleled cascade of capital investment into this remote wilderness, creating fortunes many times over for those involved early.

It was similar for the investors in companies owning oil sands leases. As these developments went from science projects to mega-producers, stocks such as Canadian Oil Sands (OTC: COSWF) soared by over 1,000%.

Being an early buyer in this sector, you could have bought nearly any company with "oil sands" in its marketing material and made triple-digit returns. It was one of the most remarkable investable events of the past half-century.

I'm telling you this because of a site visit I took last month to an equally out-of-the-way place -- a place where this mega-investment pattern is starting to happen again.

That trip confirmed my suspicions that massive, natural gas-driven investments here are going to blow the local economy through the roof. 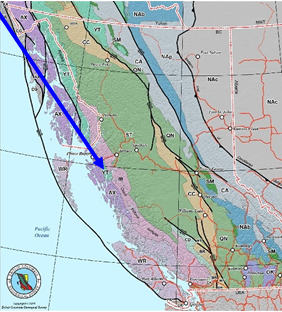 Here, I saw how super-major resource companies have already started placing investments that are pegged in the tens of billions over the coming decade. It reminds me of those early days in the oil sands -- a time when no one really believed the grandiose investment plans being plotted in corporate budgets.

More importantly, it reminds me of a time when investors who ended up raking in triple-digit returns from those resource discoveries were still just getting involved.

And while this new natural resource hotspot may remind me of other tiny towns I've seen explode with the wealth that follows natural discoveries, it actually holds major advantages over the other boomtowns I've seen.

It's not just oil or gold.

This area is promising both -- and even more...

On top of the unprecedented drilling for gas and oil, there's a gold rush happening in this boomtown's mining industry.

The local geologists I talked to say the mining opportunities in this boomtown are some of the best they've ever seen.

That's why copper and gold exploration companies there are drilling like crazy.

For example, in the spring of 2013, Colorado Resources raved about their findings in this region. They found previously untapped deposits of copper ore and an estimated 1.19 million ounces of gold. 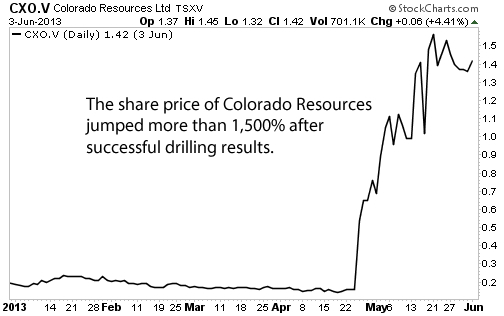 Not only is this town situated in the center of massive new oil, gas, and mineral deposits --it's also located on the edge of a deep-water bay, giving cargo ships easy access to the ocean.

So why haven't you learned about this opportunity yet?

Because this location is so remote, I'd bet not 1 in 1,000 investors has ever heard of it.

That's because most commodity "experts" you see on CNBC or writing for The Wall Street Journal rarely leave their offices. Most financial analysts spend all day looking at computer screens.

And you won't find much on this remote location that way.

In fact, when I did a Google search on this town I found that so far, not a single major media outlet has written about this place.

So you won't read about it in Forbes, Barron's, The New York Times, or Newsweek.

I've recently compiled a special report detailing my research on this boomtown and what its rare mix of resources can do for early investors. To the best of my knowledge, the information I'm about to give you can be found nowhere else. You can access this free research by following this link. You'll want to act soon, because by the time this town is making headlines in The Wall Street Journal, it will be too late -- most of the gains will have already been pocketed.

This article was originally published by Streetauthority under the title: The First $1 Trillion Boomtown... And The Media Isn't Talking About It (Yet)

5 Tricks To Making Money By Investing In Collectibles
How to Buy Your Very Own Troubled Bank
The LBO Value Equation
Don't Invest In BDCs Without Reading This First...
3 Simple Ways To Get Started Investing In Art
Ask an Expert
All of our content is verified for accuracy by Paul Tracy and our team of certified financial experts. We pride ourselves on quality, research, and transparency, and we value your feedback. Below you'll find answers to some of the most common reader questions about The First $1 Trillion Boomtown That Almost Nobody Knows About.

If you have a question about The First $1 Trillion Boomtown That Almost Nobody Knows About, then please ask Paul.

If you have a question about The First $1 Trillion Boomtown That Almost Nobody Knows About, then please ask Paul.

AcreTrader Review: A Unique Way to Invest in Farmland

AcreTrader is a real estate investing platform that allows accredited investors to own shares of farmland property. Read More ›