In the summer of 2004, George W. Bush and Senator John Kerry were locked in battle, seeking votes for the upcoming Presidential election. Another major event was making the headlines that summer as well: Google (Nasdaq: GOOG) was preparing to launch the most important IPO of the decade, eventually choosing to price its shares at $100 each when the stock debuted in mid-August. The stock would hit $200 by the following spring, $300 by the end of summer, and $400 by that autumn, a little more than a year after the IPO took place. 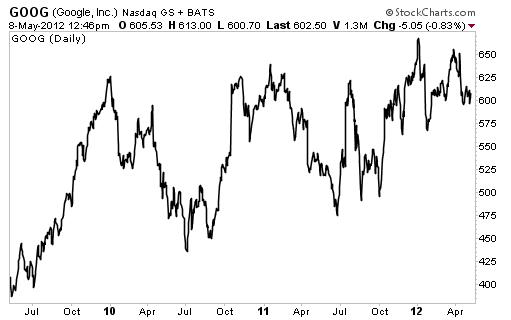 Fast-forward to 2012, and we're talking about the largest IPO of this decade: Facebook (Nasdaq: FB).

Facebook's IPO happened at about 11:30 a.m. Eastern time on May 18 -- with founder Mark Zuckerberg ringing the opening bell at the Nasdaq stock market that morning. The stock's opening price was $38, meaning that the company's value was just more than $100 billion. That's nearly three times the value assigned to Google when it went public (and roughly half of what Google is worth today).

Should investors expect a sharp 300%, 15-month gain for Facebook, as was the case with Google? No way. That would value Facebook at nearly $400 billion, almost up to Apple's $530 billion valuation. And Apple is vastly more profitable now than Facebook will likely be five years hence.

Still, even at that $38 open price, investors may still see solid upside -- at least according to a pair of analysts that have already come up with post-IPO price targets. Sterne Agee's Arvind Bhatia (who correctly predicted the sharp eventual pullback for Zynga (Nasdaq: ZNGA) before that IPO started trading) thinks shares of Facebook will settle in at $46. That's nicely higher than the $38 per share opening price. Wedbush Morgan's Michael Pachter thinks shares are worth $44. These analysts agree Facebook may be valued at close to $150 billion by the time the IPO dust settles. Here's why...

This firm thinks Facebook will irrevocably alter the online advertising market, just as Google did. The key factor: Facebook's 900 million monthly users, half of which log on daily. That kind of reach should enable Facebook to garner a growing slice of a growing pie. The online ad market is currently around $68 billion, but should reach $120 billion by 2015 -- a 13% annual growth rate. Facebook already garners 5% of all online ad revenue, and that figure could rise to 8% by 2015.

Sterne Agee's boldest prediction: "We think FB can more than triple its revenue and EBITDA over the next 4 to 5 years." The social-networking giant had $3.7 billion in revenue in 2011, and that figure should top $5 billion this year. (If you're keeping score, Facebook's offering price equates to nearly 20 times projected 2012 sales, and these analysts' price targets imply a move up to 30 times projected 2012 sales. That's rich.)

How can they justify such a large price/sales target multiple? Because Facebook makes a solid profit on every dollar of sales. The company had 62% EBITDA margins in 2011, though that figure should slip to 58% this year. Indeed, Facebook's profit levels fell sequentially in the first quarter, which would have hurt the prospects of a lesser IPO. For now, the company is getting the benefit of the doubt that rising revenue will yield scale economies -- and stable-to-rising margins.

#-ad_banner_2-#Yet investors will need to simply ignore any near-term valuation measurements for this stock. After earning $0.43 a share in 2011, Sterrne Agee predicts EPS (earnings per share) will rise to $0.56 this year and $0.69 in 2013. So their $46 price target implies a P/E of 67 times projected 2013 profits. Make no mistake, Google's solid post-IPO performance was based on the fact that profits were able to keep growing at a very fast pace, and Facebook will eventually be judged by that metric as well. You can only be a "story stock" for so long.

This firm's argument for a nice post-IPO spike is very similar to Sterne Agee's take: Rising market share in online advertising should help deliver sustained growth. The key twist: Facebook is also set to rake in ample profits by getting a hefty (30%?) cut of online-gaming revenue from partners like Zynga. They note that "sale of virtual goods on social networking sites, online worlds and casual games is expected to grow to $14 billion by 2016, up from $9 billion in 2011."

Wedbush Morgan's Pachter sees EPS hitting $2 by 2015, and figures shares will trade for 22 times that number -- or $44. Yet he also acknowledges that demand for "Facebook shares will likely outstrip supply," meaning shares will likely trade much higher than the offering price, regardless of metrics like EPS.

For my part, I'm intrigued to think about what Facebook will do with the roughly $5 billion to $6 billion in cash it will get from the IPO. Will Facebook step up its development efforts, launching the company into new ancillary businesses that feed off of the social media model? Will the money be used to buy up any hot technology firms that sprout in Silicon Valley or elsewhere? Mark Zuckerberg likely already has plans formulated in his mind.

Risk of a poorly-received IPO? None. Risk that shares will eventually soar so high that late-to-the-game investors will be burned? Quite possible.

The Investing Answer: Shares could see such scorching demand that they open even higher than these price targets, and few will be shocked to see this stock at $60 or $70 in a few weeks. These mid-$40s price targets are instructive, because if shares indeed move well above any sort of fundamental justification, then you should grow much more cautious and look to take profits if you already own shares. Unlike Google, which was priced in a more reasonable fashion, this IPO will be expensive to start with and only get more expensive from there.

5 Credit Cards That Will Pay You Hundreds Just For Signing Up (2020)
What's even better than earning rewards for spending on your credit cards? Getting paid hundreds of ...
The Top 4 Balance Transfer Credit Cards for 2020
Tired of dragging credit card debt around with you? Taking 15 minutes to transfer your debt to a cre...
The 5 Best Rewards Credit Cards for 2020
If you're going to spend money anyway, then why not get paid for it? Whether you're looking for c...


LATEST
How to Avoid Paying Bank Fees Once and For All
6 Steps to Avoid Late Fees on Your Credit Card Bill -- Forever!
How to Choose the Best Credit Card Offers
The 8 Best Reasons to Invest in a Roth IRA
5 Tips to Know Before Using an Online Brokerage
Copyright © 2020. InvestingAnswers, Inc. All Rights Reserved